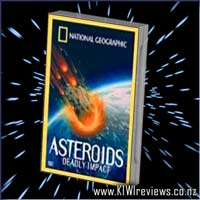 Disclosure StatementFULL DISCLOSURE: A number of units of this product have, at some time, been supplied to KIWIreviews by the company for the purposes of unbiased, independent reviews. No fee was accepted by KIWIreviews or the reviewers themselves - these are genuine, unpaid consumer reviews.
Available:
May 2005

Every year, millions of asteroids and comets or ''stray bullets'' streak through the skies, and tons of small meteorites strike our planet!

Some 65 million years ago, dinosaurs were wiped off the face of the earth, in what many believe was the aftermath of a massive cosmic collision. Could something like this happen again? Scientists believe that the impact of an asteroid only a mile wide would be globally catastrophic.

Join extraordinary geologist Eugene Shoemaker and his wife Carolyn who have remapped the heavens with their discoveries of more than 30 comets and hundreds of asteroids.

Now that we know what's out there, how can we defend ourselves?

We don't think about huge rocks streaking across our sky wrapped in fire, crashing down upon our fragile planet delivering death upon us... and when we do, it's almost always the hollywood-giftwrapped versions such as 'Armaggedon' or 'Deep Impact' where the loss of life in minimal and the ingenuity of mankind saves us all by the smallest margin possible. Or, it's something sanitised by time and softened by schoolbooks, and presented as 'just a theoy' of how the dinosaurs died.

But how often do we actually realise that we are ALWAYS being pelted by thousands of tiny rocks, small rocks, and even medium rocks... that's what those little streaks of light we catch out of the corner of our eye really are. That's what removes the occasional satellite or spacecraft-bit. But that's not all that comes at us.

Hosted by Eugene Shoemaker, co-discoverer of the Shoemaker-Levy comet that struck Jupiter a few years ago, this documentary really opens your eyes to many things. Some of the 'volcano remains' around the world have since been reclassified as residual impact craters from some moderately small asteroids. A particle the size of a baseball, hitting the earth at orbital speeds, can leave a crater substantially larger than you would expect, with enough force to level a city block!

Gives you cause for thought doesn't it. As Shoemaker pointed out, if you want to see what scars earth would have if our atmosphere was any thinner than it currently is, look to the moon. Then reconsider your use of environmentally damaging technologies that can affect our atmosphere. As it gets thinner, so do our chances of surviving the next medium-sized impact.

Overall, I found this to be a very informative, extremely thought-provoking documentary, with a great bonus feature all about our quest for space... and they tie in together so well, one can only hope we will solve them both, before the universe calls 'final drinks' and slams a mountain on our heads.

If you want to do the ostrich 'head-in-the-sand' trick, by all means go for it. You can stay here while the rest of us run for cover behind another sun. But if you have any ability to think 'Big Thoughts' and accept that there are things beyond our control and it's time to smarten our act up... then this should be part of your library.