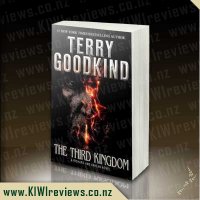 Terry Goodkind returns to the lives of Richard Rahl and Kahlan Amnell in "The Third Kingdom, "the direct sequel to his #1 "New York Times" bestseller "The Omen Machine.

Richard saw the point of a sword blade sticking out from between the man's shoulder blades. He spun back toward Richard after throwing the woman out the opening, ready to attack. It seemed impossible, but the man looked unaffected by the blade that had impaled him through the chest. It was then, in the weak light from the fire pit off to the side, that Richard got his first good look at the killer.

Three knives were buried up to their brass cross-guards in the man's chest. Only the handles were showing. Richard saw, too, the broken end of a sword blade jutting out from the center of the man's chest. The point of that same blade stuck out from the man's back. Richard recognized the knife handles. All three were the style carried by the men of the First File. He looked from those blades that should have killed the big man, up into his face. That was when he realized the true horror of the situation, and the reason for the unbearable stench of death.

It took me ages to read this book which is never a good sign. I've been a big fan of Terry Goodkind for a long time (and a fan of the fantasy genre for even longer) and it pains me to admit that some of his later books have been a bit hit and miss - perhaps the characters have been overused or he's struggling to find new, original material, whatever the reason this book comes across as tired and uninspiring.

There were good parts at the beginning and while the main storyline was unfolding but as soon as the action began I lost interest - it was like an episode of the Walking Dead TV series. The characters felt weak and they talked far too much, it started to get repetitive. I didn't feel any emotional involvement in the story/characters (not even when a well known character died) which is a shame as that is the mark of a great author, being able to pull people into their world. I also felt like a chunk of the story was missing from the end and it finished abruptly. It was also hard going because of all the grammar mistakes, of which there were too many to count.

I will be reading the next book in the series, I just hope that I won't be too disappointed by it.

At first the Dreamrealm is a glorious escape from Awa's daily struggles but something is not ... more...