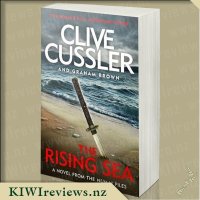 Their hunt takes them from the shark-filled waters of Asia to the high-tech streets of Tokyo to a forbidden secret island, but it's in the East China Sea that a mysterious underwater mining operation is discovered. A devastating endgame. Kurt uncovers a plot more dangerous than they could have imagined: a plan to upset the Pacific balance of power, threatening the lives of millions.

Once again, it falls to the NUMA team to risk everything to stop it and save the world from the coming catastrophe.

When it comes tot he list of "Stupid Things People Do for Money", deep-sea mining is certainly right up there. Add in the newly-discovered findings hidden in and below the Earth's crust, the scenario posited in this story is chillingly plausible, especially when you look at the three main "power characters" on the antagonistic side of the playing board. You have Wen Li - a Chinese power-broker unlike all others, a spider in the web that is Chinese politics... Walter Han - Half-breed Chinese/Japanese business mogul with the public appeal of a teddybear and the instincts of a pit viper, plus Ushi Oni - dishonoured Yakuza assassin now modern-day ronin, known as The Demon due to his blood-soaked track record.

These three work together to bring about a shift in the global power structures, but with one small set of instructions entered into an automated mining facility, inadvertently trigger a chain-reaction that could bring about the end of life on Earth as we know it. Ever seen the movie "Waterworld"? Yeah... something biblical like that.

As with all other Cussler co-authored novels, this one grabs you from the start and keeps you turning pages long after you have lost feeling in your fingers... but unlike every other Cussler novel I have read, the ending on this one was abrupt, weak and left me feeling more than a little disappointed. Whether the authors ran out of steam, couldn't see the obvious "nice" way to wrap it up, or the editors demanded the pruning of about a chapter's worth of climax... I was stunned by how roughly the story wound up. The final chapter was just 7 pages long, 4 of which were taken up with scene-setting and dialogue between Kurt and a Chinese General, that could easily have been replaced with more entertaining and relevant story summation. What a disheartening end to the stunning and entertaining story that filled the previous 397 pages.

I found the characters to be rich and deep, with enough back-story to flesh them out but nothing irrelevant or unnecessary, and the story to be well-paced and filled with twists. There were no "What the...!" moments in this tale though, something I am noticing in the stories co-authored with Graham Brown. There's a very linear revelation in his tales, that doesn't lend itself to big red-herring plot-shifts easily. While this makes for a compelling and straight-forward read, it's nice to occasionally have that semi-disconnect that a good twist presents.

Overall, a very good read right up until Page 400. You may as well stop reading at that point and ignore the last 3 pages, as they bring nothing to the tale at all, and present you with a limp and decidedly unsatisfying ending... like eating a delightful 5-star dinner, and rounding off the night with a flat cola and a rubbery bit of cheesecake that passed its best-by date a week ago. Seriously hoping this is just a hiccup in the road, and not the path Cussler and Brown intend to take in future novels.