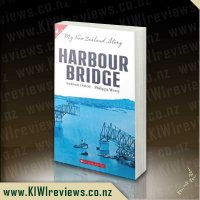 The Auckland Harbour Bridge is under construction. Simon likes watching the bridge being built, and talking to his uncle and his mates about what's happening on site.

Meanwhile, Simon's best friend Marty is obsessed with the Space Race and younger sister Jo can't stop worrying about the fate of the dogs and monkeys that are the world's first space travellers.

Everyone says that life on the North Shore will change once the bridge is finished... but what does that mean for Simon and his family?

This book was easy to read, the diary entries were short and to the point. I can't imagine how much the bridge would have changed things as it has always been there but there were some points that the locals were worried about, no more ferries and that life would be a lot busier. Living in Auckland I know that there are still some ferries but nowhere near as much as there would have been in the 1950.

Some of the parts were a bit lost on me, when they were describing exactly how the bridge was being built but I did enjoy the photos that followed the book, some were hard to recognise where they were taken and some of the actual bridge was easy as it still looks exactly like that. There were some funny parts (who would think of doing a fake funeral for space animals?) and yes I would have to agree about making sure you were in the correct lane before going over the bridge (the same fear of what happens if I miss my turn off due to being in the wrong lane stopped me using the bridge for years, would go upper harbour but now I know it is very user friendly) and some parts touched on sad subjects like the people who died during the construction.

I'm loving this series and hope to get a lot more of the books to read and keep for my kids when they are older as I would never be able to explain what went into the building of the bridge. I also really enjoyed the facts about the bridge that were included at the end.

The time during which the Auckland Harbour Bridge was being built was a time of great, rapid change, in the world. Harbour Bridge is written in diary style through the eyes of Simon who has been given the task of keeping a diary when he started intermediate school.

The story starts part way through the building of the bridge and we quickly discover to make way for the infrastructure required that one of his friends houses has been demolished. We are reminded that this was a very different era to what we live in now. The space race had just started, Opo had died, chimpanzee's still had tea parties at Auckland Zoo and New Zealand's first supermarket opened.

While the book isn't intended primarily as an adults read it is well worth reading, I learnt a lot about the construction of the bridge, from the fact that it was a multinational affair, men came from all around the world to assist in building the bridge, it touched on the deaths of the three men who died during construction, and it goes into detail about how some of the parts were constructed.

Although it is a work of fiction it is very strongly based around the real events of the time, and clearly portrays the mixed feelings of those living in North Shore at the time, the amazement of this bridge being built yet at the same time the sadness at the loss of the ferry's and their semi rural lifestyle. It is also interesting to note that some of the things which are now in use on the bridge were ideas that were there during, if not before, the build. There is also an excellent time line around the bridge and interesting historical facts from the 1950's.

As with other books in the My New Zealand Story series this is a great read for all ages, reminding us of our local history in a way that it is easy for our children to relate to.