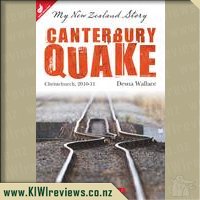 Canterbury Quake is the latest installation of the popular 'My New Zealand Story' series; the debut novel of Christchurch writer Desna Wallace. Wallace skilfully recreates the fear and distress felt during and after the 2010-1022 Canterbury earthquakes, through the fictional diary of eleven year old Maddy.

I have always been fascinated by natural disasters and I remember the Canterbury Earthquake very clearly. I didn't experience as I live in the North Island but it was all we saw on the news for weeks. I have friends that live in Christchurch and had heard their recounts of the quakes but this book was quite different. It is the diary of a fictional 11 year old girl but contains so many events that happened.

Knowing this book was written for intermediate age children I was surprised how I reacted to reading it as an adult. There were several parts I was in tears as I thought of what the people of Canterbury were going through. Since it was written from a child's perspective it didn't go into as much detail about the stresses for the adults although it was certainly touched upon. For Maddy it was more about wishing things had never happened. She wanted the simple things in life like to go to the movies, walk along the pavement without having to watch her step. All the things she had taken for granted.

I thought it was well written with the part before the quakes showing Maddy to just be like any other 11 year old who wanted a cellphone, to perform with her best friend and to be rid of her annoying brother and sister. During the quakes all she wanted was to be with her family and know they were safe. It reflects the saying you don't know what is important until it is gone.

Having won this book from KIWIreviews and enjoyed reading it I will be donating it to my daughter's primary school from their library as I think the mix of the story and the photographs will really touch the children and make them aware of how lucky they are.

Having been in Christchurch for all the major earthquakes I was keen to review this book, but at the same time I was hesitant. Actually when it turned up I wasn't sure I'd made the right decision in requesting to review it. However once I got reading I found there was no reason to stress.

Being written in a diary format means that it's a quick read, it's very easy to convince yourself to read just another entry before putting it down, which inevitably turns into quite a few more entries. It was realistic in terms of the feelings, emotions and actions that many, including myself, went through over that period. The nights after the main shakes being unable to sleep is still very clear in my mind. I had to laugh when she talked about storing things on the floor as she was sick of picking them up all the time, an on going joke in Christchurch was if you couldn't find anything it'd be on the floor using the new floor storage system.

There were some interesting observations about things that happened directly after the February quake which I didn't consciously remember but after having my memory jogged they came back. Then, the only way I can put it, was her going through the stages of grief, which I think some people forget isn't just about death. It also deals with the feelings of jealousy of those who lived elsewhere or who moved away. All of this while dealing with the regular things that an 11/12 year old has to deal with every day.

This book is interesting in regards to the fact that it finishes a couple of weeks after the large June quakes which isn't the end of it for Christchurch. I feel this was a good time to end it, the writer is starting to talk about the "new normal" which most Cantabrians can relate to and for a lot of us it would have been around this time that became clearer.

I also passed the book to my now 8 year old son to read, he was 4.5 when this whole adventure started so I was interested to see what he thought of it. He loved the writing style and found it easy to read. It opened a dialogue that we probably hadn't had with him before and we had a week of questions from him about various aspects of that time.

Overall I feel that this book is a great tool and an important read for all New Zealand children (and adults), and for those that lived through the experience it validates what they felt and allows them to realise they aren't the only one who had those feelings.

I was a little bit dubious when I first looked at this book as it is done in diary format. I wondered about the quality of writing and how accurate the story would be. It is written from the perspective of a 11 year old girl (almost 12!!) who is living in Christchurch at the time of the Earthquakes.

The reader gets to glimpse at her life pre-quakes, where she desperately wants a cell phone. I really liked this as I'm certain this is a stage that all young people go through, so it makes the character really relocatable for young readers. As the novel goes on she gets one for safety reasons so her parents can be in contact if another big earthquake happens and she is at school. Her parents set boundary's and this again is a realistic example of a stage that young people perhaps can struggle with.

The writing is quiet basic, but for young readers trying to get to grips with the contact, I think it really works. I read this in one sitting - it's very easy to read and really enjoyable living through the eyes of a young person. It's very believable and very accurate. The main characters sisters High School closes and we get accounts of how her sister is slowly becoming a little depressed and we see how she finally expresses her concerns with her sister.

The story is a bit of an emotional rollercoaster, and will be valuable in the future as a text that explains what happened in a raw yet compassionate and gripping tale. I can see that this will come in handy in the classroom context for me personally and will be able to assist me in explaining what happened in Christchurch to my own children when they get a little older.

It has a great historical note at the back along with some emotive photographs that really show the destruction and devastation that happened in the shaky city.

I think this is a fantastic book, I have read a few from this series already but this is by far the best, perhaps as it is very recent and my memories are still vivid. I like how it talks of all the little things such as the newspaper being printed in the North Island, Facebook and the outdoor toilet competition that ran to make a light joke about a dire situation. It's a great price and I would definitely buy more copies if needed.

Shadow is really making waves and now the coral reef is in danger. Special Agent EJ12 could be in over her head but she must stop SHADOW before it is too late.