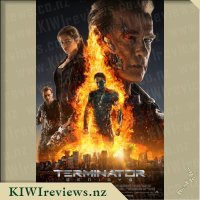 This film has been described as the true 3rd installment in the Terminator franchise. Taking place before 'Rise of the Machines' and 'Salvation' the film can ignore the consequences of these films, and place focus on the parts that made it great.

And it certainly does focus on the original classics. My recommendation, is to definitely see this film AFTER rewatching the first terminator film. There are so many easter eggs in the film that reference its predecessors, and it was amazing to watch. The CGI is actually improving to the point that you can barely tell that there is a completely CGI Arnie in the film.

Despite looking younger, the actresses playing Sarah Connor have some remarkably similar facial features, and having two main characters with the same last name in real-life, playing mother and son in the film, is just another example of how well thought out this film is; whether intentional or accidental, I love it. Not so much the constantly changing appearance of John Connor between the films, but I guess they've never found the right fit.

The film itself pretty much goes from action-packed scene to action-packed scene, never really slowing down. Arnie seems to be in a perpetual game of catch up, as the main characters go boosting ahead, and he is left waddling along at his slow, methodical, trademarked walking rate. But it provides with pleanty of opportunity for terminators to come busting in and showing up in a variety of situations, which certainly keeps the interest.

I watched this film in 3D, and if I have to be honest, it added very little to the experience. But it didn't need to. Within the first 15 minutes I knew that this film would be a success. The idea to make the antagonist the character that has been the protagonist in the past, but that past is in the future opened up so many doors. You didn't need to write in random ways of the enemy finding you, or revealing the plan. Suddenly, the unknown future actions are what is creating the most dire consequences. It's brilliant. Hard to follow sometimes, but brilliant.

Terminator is Arnie. Arnie is Terminator. He is the robot that gives you all the feels, and is a great source of emotion and humour. As long as Arnie is cast in a Terminator film, I will continue to watch them.

Julian Michaels (Bruce Willis) has designed the ultimate resort: VICE, where anything goes and the customers can play out their wildest fantasies with artificial inhabitants who look, think and feel like humans.

When an artificial (Ambyr Childers) becomes self-aware and escapes, she finds herself caught in the crossfire between Julian's mercenaries and a cop (Thomas Jane) who is hell-bent on shutting down Vice, and stopping the violence once and for all.