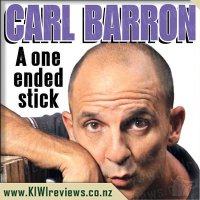 Disclosure StatementFULL DISCLOSURE: A number of units of this product have, at some time, been supplied to KIWIreviews by the company for the purposes of unbiased, independent reviews. No fee was accepted by KIWIreviews or the reviewers themselves - these are genuine, unpaid consumer reviews.
Available:
For a limited time

I have just come back from watching Carl Barron live at our local Founder's Theatre. My throat is dry as sand from laughing. When we arrived earlier in the evening, we got seated pretty quickly. The stage was set, with a couple of chairs and a guitar. The theatre was almost full to capacity by the time the lights went down. The backdrop was simple but fun, a doodle and "CARL" underneath.

As he came out onto the stage, he took some time to get a feel for the audience. A few quips about the wait backstage, the theatre itself. The material range is not always lewd, but he recounts experiences from childhood and early adulthood that I was able to connect with even if I had not personally experienced those things. The things I had lived through, parents, siblings and family in general made me laugh all the way through.

He did a couple of impressions, not of anyone in particular but just how it might sound if someone posh started talking in slang. I couldn't contain the laughter at those points. He plays a bit of guitar. But the toilet humour was a winner any day of the week. So the quips about sex, kissing, and where he takes it a little far or starts miming the action to go with the story had me in hysterics. I liked that after each story, he would bring an element in that would tie that story to the next, even if the link was loose. It was like we were all in on the same "in" jokes.

One thing that he did though, that absolutely astonished me was that he had one very loud drunk heckler in the front of the theatre. She started up at him almost straight away and kept having to have a say. He warned her that he wanted her to be quiet. He told her that she was disturbing everyone else who had paid good money. She didn't take the hint and eventually he made good on his promise to kick her out. The entire theatre was behind him on that one and she was clapped right out of the theatre.

Words of advice - stay seated for the encore. The best moments were during that encore, and as I say I was already well enjoying myself. He also stayed after the show to sign things and was just a nice guy as well as a professional on the stage, aside from the jockey moves of course. A great show, I will definitely be looking out for tickets again next time Carl Barron is in town. 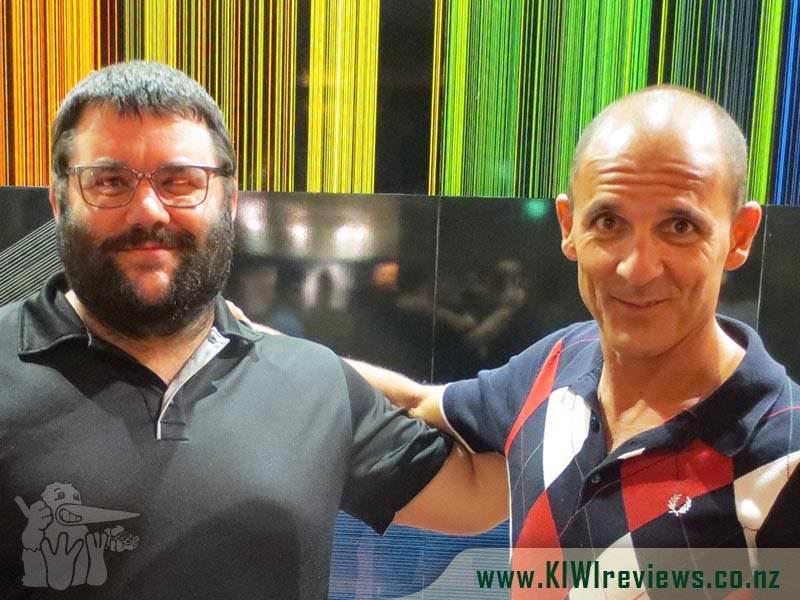 There are few comedians that can make me laugh hard enough that, as Carl himself would put it, "a bit of wee came out"... and Carl is one of those that do it to me every time, even when I have heard the jokes before. In more ways than one, Carl is, for me, the mirror image of Billy Connolly - the same ability to veer wildly off on a tangent then drag the show back to the original punchline (sometimes with help from a willing audience member), but while Billy is renowned for his mane of wild hair, Carl's dome is as devoid as his surname suggests.

Tonight's show was astounding, and honestly it was the most inspiring comedy show I have yet experienced... while no stage-performer enjoys a heckler, Carl took it one step further by giving one drunk woman three warnings to "stop talking, or I'll have an usher lock you in your car with a stray fart. Do you want that? Then just shut up..." with the added explanation that "...those people around you probably didn't pay for their tickets to listen to you talk all night..."

When the hapless heckler refused to get the hint, Carl stopped the show and actually had her removed, much to the delight of the entire audience, who clapped and cheered as she was escorted, with her mortified companion, out the doors. Carl's parting shot was to "...give her a refund and pack her off home!" - PRICELESS! I just wish all stage shows performers had the fortitude to enforce such audience consideration!

As for the humour - well, Kiwis are a fickle bunch. The show played out like a good game of high-stakes poker - the first 20 minutes were basically spent with Carl 'getting a feel for the crowd'... finding out what worked, and what didn't. But once he had a handle on the vibe, the show rapidly progressed into a laugh-a-minute barrage of antics guaranteed to have everyone howling for most of the show. The old adage "You can't please everyone all the time" is just as true of a live performance - While some laughed, others didn't... but the hallmark of a true comedian is the ability to always have most of the audience laughing, and to 'move it around' so that everyone has something that causes them to cry with laughter at least a few times.

The comedy wasn't always just verbal, with Carl using music and actions to punctuate, highlight and amplify the jokes up to pants-wetting, tears-running levels in places, and somehow finding situations that some audience members probably have never encountered - like his perceptions of the world during an accidental and unwitting LSD encounter thanks to a wayward hippy and a bowl of punch - but could still empathise with and become enthralled in. While I have never experienced anything quite like his acid trip, I could still imagine the scenarios he was describing and I will carry the marks of humour-induced thigh-slapping for the next few days, I am sure.

A couple of pro-tips... after Carl departs the stage, don't get up! You may find yourself mid-departure when he walks back on stage and throws a few final jokes at you that will leave you weeping in mirth. Also, once you are certain he HAS gone off-stage for the last time, be sure to hang around in the foyer, as he came out and signed some merchandise (and one of our #Movember Celeb Postcard for this year's Charity Auctions!) and did some photos with fans. He's actually a really genuine guy off stage, unlike some, so it's worth spending a few minutes to say g'day.

Overall, this show was worth every penny, even though we ended up sitting way up the back in the 'nose-bleeds'! Thanks for an awesome show Carl!

These five classic Hancock episodes are drawn from the fourth series of Hancock's Half Hour, broadcast from Boxing day 1958 through to March 1959.
At this point, with his immensely popular radio series still running, Anthony Aloysius St John Hancock was undoubtedly the nation's favourite comedy character.