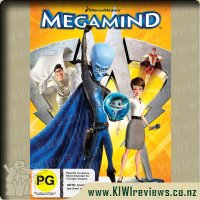 MEGAMIND IS THE MOST BRILLIANT SUPER VILLAIN EVER KNOWN... and the least successful!

Over the years Megamind has tried to conquer Metro City in every imaginable way. Each attempt, a colossal failure thanks to the caped superhero known as "Metro Man" (Brad Pitt), until Megamind (Will Ferrell) actually defeats him in the throes of one of his botched evil plans. Suddenly the fate of Metro City is threatened when a new villain arrives and chaos runs rampant, leaving everyone to wonder: Can the world's biggest "mind" actually be the one to save the day?

This film is great because it comes from the view of the supervillain - a perspective that is usually lost in most films. The supervillain is generally there to threaten the world with a convoluted plan, and be thwarted with little effort by the superhero. But this film delves further into the relationship between superhero and supervillain. I used the term 'supervillain' and 'superhero', to emphasise that we are talking about villains and heroes with that have inhuman powers, and villains whom aim for world domination.

Megamind highlights the co-dependence between hero and villain. They provide each other with a purpose and there are consequences for destroying that balance.

I enjoyed being able to watch a movie where the viewer is able to sympathise with the villain, to realise how that person is generally a victim of society, that has been cast out, and often wants nothing but to be able to interact, even if only able to through violence.

Due to the style of animation, it resembles an 'Incredibles' film, and thus I have had trouble placing the movie, when the title is mentioned. Beyond the title not sticking in the mind, the movie was highly enjoyable, and within 2 minutes of starting to re-watch it, I could recall the movie in its entirety, and I still re-watched it.

Megamind is the villain in this movie, without a doubt, or perhaps he is the hero of this movie?? Well why not be both?

Megamind was sent away from his planet as a baby, along with his Minion, and whilst on his way to Earth met another baby (also in travel from a different planet) who was to become Metro City's superhero in time to come. As they grew they disliked each other and each found their calling, one as the hero and one as the villain. During yet another attack on the city Megamind finds himself to finally be rid of his foe and in control of the city but things start to go downhill when he becomes bored and wants someone to fight and he also begins to fall in love (via disguise).

We originally borrowed this as one of the kids picked it, and I wasn't sure what to expect as I wasn't sure I liked the look of the characters and I really don't like Jonah Hill, he just annoys the heck out of me. Getting into it though was easy and it wasn't long before the laughs started. We recently watched this with my mum and she couldn't stop laughing. You are cheering for the villain and really get a feel for him, bad by choice but who at heart just wants to be accepted.

The storyline is great and I really like the ending (though I can't say anything about it for fear of spoilers) needless to say I wasn't expecting it, then it gave me what I expected and then wham! again changed in a way I wasn't expecting, so well done. It's a great happy ending. My only thing (other than Jonah Hill) was that the only characters you felt for were Megamind and Minion but there wasn't enough to depth to any other characters and Hal was nothing but annoying.

This is a really fun movie and I'm looking forward to watching it again with the kids.