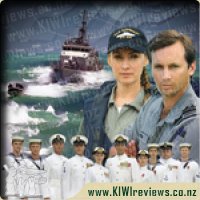 Twenty-four sailors from every walk of life, of every age and temperament, living literally cheek-by-jowl for week after week, away from family and friends sometimes for months at a time. All crammed in an elderly 40 metre metal hulled boat - in seas of all conditions with temperatures often in the 30's.

It's a pressure cooker that can bring out the best, and sometimes the worst, in all of them - man and woman alike. It calls upon reserves of devotion to duty, tolerance, obedience and of course humour, way beyond that which most people possess.

I originally watched this on TV when it first came out, I have seen Lisa McCune in Blue Heelers and was interested in seeing if she would deliver yet another great story. Each episode was great, good story and totally believable, not being in the navy myself I would imagine it to be a lot like Sea Patrol.

There is a lot of action for the guys and good looking guys for the girls. The story was well written and the actors did their parts really well, you could almost believe that they were lost or scared but above all determined to do their duties. With only 2 girls on the boat there was not a lot of romance, the story was more about the duties to protect Australian waters but there was hints at romance between some of the characters.

It was great to see some of the actors I have seen in other shows and loved, the bonus would be the amazing story

Orange Is the New Black (often abbreviated to OITNB) is an American comedy-drama series created by Jenji Kohan and first released on Netflix on July 11, 2013. The series, produced by Tilted Productions in association with Lionsgate Television, is based on Piper Kerman's memoir, Orange Is the New Black: My Year in a Women's Prison, about her experiences in prison.

The story of Piper Chapman (Taylor Schilling), a woman in her ... more...