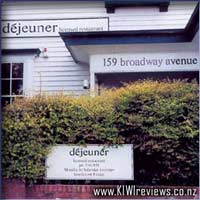 Disclosure StatementFULL DISCLOSURE: A number of units of this product have, at some time, been supplied to KIWIreviews by the company for the purposes of unbiased, independent reviews. No fee was accepted by KIWIreviews or the reviewers themselves - these are genuine, unpaid consumer reviews.
Available:
Mon-Sat from 6pm

Established in 1984, Dejeuner has provided the city with two decades of consistent quality dining and been rewarded with the prestigious independent Cafe Magazine's "Best Restaurant" title for the region a number of times. "Sensational food, and informative host, terrific atmosphere and surroundings."

Whether for intimate or special occasion dining, solo or corporate dining, pretheatre and casual dining, big groups (up to 35) or small, Dejeuner is ideal! Friends or guests from out of town? Come to Dejeuner to impress!

To be honest the name Dejeuner is simply intimidating for a bumbling philistine such as myself, so I was understandably hesitant about my excursion into the territory of such a posh sounding restaurant. I thought I dressed nicely, and tried ever so hard not to let my knees quake as I ambled into this rather small and cosy establishment.

Initially my companion and I were seated in the center of the restaurant, which didn't quite suit our mood, so a request for re-seating was in order. Although I'm sure this is a rather standard request I was impressed at the willingness of the staff to cater to our wishes by rearranging the seating for us. The overall impression was that the staff were amicable and supremely polite. This was further evidenced by a waiter repeatedly re-lighting our table candle, as it went out on a few occasions. I'm a firm believer that the attitude of staff can either add or detract from any establishment, so I was suitably impressed, and gradually began to relax.

After the arrival of our herb and sundried tomato cheese bread I was positively enthusiastic. I have never tasted such delicious bread in my life. And I'm a bread loving carb addict from way back. Quite frankly this bread is divine, and I recommend it as an absolute must have for anyone dining at Dejenuer.
This was followed with a sampler shot of carrot and coriander soup. I thought this was a lovely touch and probably an incredibly effective taster because the soup itself was just as tasty as the bread. Which is a testament to how good that soup must be, as I'm usually a soup phobic.
After the soup sampler I was also treated to another sample, this time a small portion of Boysenberry and Vanilla sorbet, which was perfection personified.
Needless to say I was deeply impressed, and we hadn't even reached the main yet.

Of course I chose the Chicken Breast on a bed of couscous, with hummus and cucumber and yogurt dressing. As my meal arrived at the table I was impressed with the presentation, falling in love with the plate, because I'm easily distracted like that. The food itself was quite enjoyable. Though I must admit to finding my personal highlights in the entrees. Which I put down to a matter of taste rather than a reflection on the food itself.

Unfortunately I chose not to have dessert, being happily satiated by the meal I'd just finished. Though I left with the distinct impression that maybe I was denying myself something wonderful. Hopefully I will return to find out sometime in the near future.

Overall I was very impressed by Dejenuer. The atmosphere was friendly and relaxed, which, when combined with the food itself, created a significantly positive impression. This is the kind of restaurant which would have a wide appeal to those who wish to experience quality dining in a non-threatening and enjoyable environment.

This, I was a bit nervous about. I'm a real "Steak'n'Spuds"-style eater by nature, so a 'posh' restaurant is not really my style... as was evidenced by the fact that I turned up in blue jeans and a black polo shirt, to casually blend in with the existing diners dressed in semi-formal livery.

As we approached the door, a very eager gentleman whipped the door open. I am so glad I paused for a moment at the top step, or I would have been graced with a busted nose. An unlucky coincidence, nothing more, as it turned out. We entered the restaurant, lit by candles and ambient light seeping in through the hedge-shrouded windows. A very cosy atmosphere indeed.

My compatriot and I were seated right in the middle of a crowd, however as we had 'business' to discuss we asked to be, and were, relocated to a more secluded spot. This was an aspect of their service that most impressed me, as they had to rearrange another seating bay and strip it back to just 2 seats for us, and they did so with much grace and willingness to please.

The eager door-opening gentleman came over and gave us the run-down on the menu while our delightful Cheese, Herb & Sundried Tomato Breads arrived. Two generous slices of crusty French-style bread, lightly grilled with the goodies on top. With a flavour and texture reminding me of a fine buttery croissant, I found them very appealing. I could happily have sat there all night eating just the breads!

Our caraff of chilled water and my Bourbon & Coke arrived, and a sampler shot-glass each of the chef's soup of the day, Carrot & Coriander, to boot. The soup was delightful! Rich, creamy, and full of complex flavours that teased the palatte. I have tried this soup once before, many years ago, and this was a far superior variant.

Since it was a busy night, and our main courses were slightly delayed, the staff kindly offered us another sampler shot, this time of Boysenberry & Vanilla Sorbet, to keep our stomachs from grinding themselves apart. Since I am not a berry fan, I reluctantly declined this appealing tempter. Not 5 minutes later, in rolled our main courses.

I chose the signature dish, Roast Lamb Shank. Twice roasted, saddled on Skordalia potato mash with a fresh thyme jus, layered with julienned Red Capsicum, Carrots, Beans and sliced Courgette. Although lamb shank carries a slightly gamey flavour, I found it cooked to perfection. It almost slid off the bone and fell into nice bite-sized pieces. The thyme jus was the perfect sauce, with an almost soy tang to it, I was captivated by the flavours it evoked.

With a few mouthfuls still left on the plate, I had to put down the cutlery, I was simply full in no time. Any more, and I would have had a waiter hovering around me saying "But it is only wafer thin..." while offering me a chocomint. (Ever seen "The Meaning of Life"?).

Overall, although I would have dearly loved to try their desserts, I just couldn't manage it. But what I did have was a delightful symphony of flavours and textures that blended to give me a very memorable dinner. The price for the meal was fairly reasonable at $70.00 for breads, drinks and 2 main meals, though they really need to cater for customers paying in cash and have some change around. I was a little surprised when the waitress returned and said in a shamed whisper that they couldn't give me $4.40 in change, and would I mind waiting while she asked around the staff if anyone could break a $5.00. I had to laugh. However, if you are looking for a cosy restaurant to wine and dine in, this is a great option to explore.

So that's why we created 'Pods' crunchy biscuit. They start off as biscuit wafer caups baked in our revolutionary Wakrone oven which ... more...