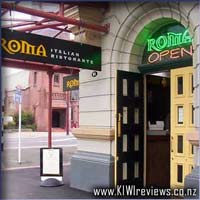 Disclosure StatementFULL DISCLOSURE: A number of units of this product have, at some time, been supplied to KIWIreviews by the company for the purposes of unbiased, independent reviews. No fee was accepted by KIWIreviews or the reviewers themselves - these are genuine, unpaid consumer reviews.
Available:
see text

ROMA
ROMA targets not only those who enjoy Italian cuisine but also (because of the widespread appeal of this type of cuisine enjoyed by the New Zealand public) anyone choosing to dine out in Palmerston North who enjoys outstanding food, service and atmosphere.

UNO
Under Roma restaurant you will find UNO, a cosy little basement Bar. Succeeding in her original design purpose as a "holding pen" for "waiting list" Roma customers, UNO has developed an identity all of her own.

With direct access from the street as well as internal stairs down from Roma for our restaurant guests, many indulge in a quiet after work get together as well as a pre-dinner drink or after dinner wind down with easy listening deep jazzy grooves.

Late on Friday and Saturday nights (midnight till three) this little bar transforms into a club feel with the latest music from the best of local and touring DJ's.

I have passed by this place many times in the past, and have smelled the wonderful aromas emanating from the front entrance and thought 'I really should try the food there to see if it is as good as it smells.' How pleased I was to be invited to join a friend in a meal there.

Accessing the restaurant proved a little tricky, as the front door was a little heavy (especially for a single person in a wheelchair) but thankfully I had help.

We were both greeted warmly and shown to our table. After being given a menu to peruse and some time to get to grips with the wide range of choices available, my companion and I slowly but surely came to our respective decisions.

A selection of fresh baked breads and assorted dips to start. While most of the bread was nice, my personal favourite was a light whole-grain type. The balsamic reduction was also pretty tasty. Next came the chicken, bacon and mushroom chowder. two words: mind blowing. The tastes and textures were perfectly matched, with the mushroom complementing the chicken and bacon. I had been warned after ordering that the soup may be a little too salty and, for some, it may be. I found it to be just right. I realised a small problem when nearing the end of the bowl... it wasn't quite deep enough. then again, if there had been more, I doubt I could have progressed onto the next course. A short pause to collect my thoughts and impressions, then came a particularly large looking bowl of Roma Carbonara. A pasta dish consisting of penne pasta, garlic, spring onions and parmesan cheese this was topped with a roasted field mushroom, streaky bacon and a lightly whipped egg yolk still in the shell. Ten points for flair and originality. I was a little unsure at the idea of a raw egg yolk, but was assured that it would cook through in the pasta and add a certain extra quality to it. Right on both counts. I was a little disappointed that the pasta seemed a little overcooked, but I felt this did not detract from my overall enjoymnt of the meal.

Deciding I would be a complete oinker and get a dessert, I poured over the 'afters' menu. I chose to get the 'chocolate pot' and a flat white coffee. On being given my dessert, I was issued with a semi-challenge 'Not many people are able to finish that, it's usually too rich.' Well, not typically one to turn from a challenge, I started plowing into a thick, and indeed rich, velvety mousse. A good mixture of taste and substance, but maybe a little too thick, as the biscotti served with it could not be dipped effectively. Sadly, I still had an overwhelming taste of chocolate in my mouth when I tried the coffee, so I was a little disappointed with it.

One thing I did notice, was there seemed to be no accessible toilets for wheelchair users anywhere near the table I was sat at.

That being said, the whole experience was a delight and I look forward to repeating it in the future.

Started off ringing at 6:30, only to be told they were fully booked but could fit the two of us in if we could wait 2 more hours. Thats always a good sign, crap restaurants are rarely fully booked. 8:30pm rolled around and we presented ourselves at the front counter. The owner himself was on the front counter greeting diners, a nice touch. Shows commitment to excellence. As we were seated we were given the menu and started discussion our options. My dining buddy and I agreed on the bread selection and a starter, and a few minutes later we were presented with our drinks and the platter of snacks. Garlic ciabatta bread, wholemeal bread, and wholegrain breads, all toasted. Along with the breads came 3 little dished with dips, olive oil infused with a reduced balsamic syrup, a tasty tangy antipasto and a spicy tomato relish. After trying them all, I thought the antipasto was the best but they all had strong good points. After that came our entrees for which I had selected the choritzo pasta. This was choritzo, rocket and char grilled bell peppers tossed through penne pasta and bound in a chunky pesto napolitana sauce. The choritzo had a wonderful flavour, and the pasta was a perfect al dente, with the sauce being spot-on, this was a well rounded dish. About 10 minutes later our mains arrived. With only one dish per meat-type, there was plenty of varity, but little choice. That actually makes things a lot easier because you arent flipping between slight variations of the same thing. I chose the chicken dish, which was fresh chicken breast marinated in cointreau rolled in dukha and resting on a slow-roasted tomato and bok choy stack surrounded by a light jus. The chicken was perfectly cooked, tender and sweet and not at all dry or chewy. The duhka is a blend of spices that adds an extra taste dimension. It was really nice in moderation. After all of this, plus a couple of drinks, I still had room for a taste of dessert, mainly because I made sure to leave room for it... the portions are generous enough that if you eat a full entree and main, you'll not have room for any more. For the final touch, I chose the chocolate brownie and a hot chocolate to drink. The dessert was delightfully sweet, but not sickly so, and beautifully offset by the slightly bitter hot chocolate. A perfect compliment to each other. The staff were wonderful, providing smooth, efficient but unobtrusive service, replacing dirty utensils almost without notice. The only downside was the location. Uneven floor levels can prove a little disturbing in you have access issues or difficulty walking, and parking nearby with a wheelchair-bound passenger is a nightmare, but neither these are in any way the fault of the business. A wonderful night out and at around $45-$50 per person it was excellent value for money, with top notch food and service.

It wasn't quite Christmas, and all through the house, a tummy was rumbling, louder than a mouse... So off to try Roma I go. Time for a treat, methinks.

As I entered, I was greeting by a very personable young lady who guided me to my table. After presenting me with a menu, and running me through the day's specials, I was left to read and decide. After much thought, drooling, and effort of will, I settled for the Carne di Cervo - Rolled venison Denver leg with a red onion & rosemary stuffing, cooked medium-rare and served on a potato & rocket mash, surrounded by a light jus and topped with a tamarillo chutney - and a nice glass of medium white wine.

To go into too much detail would be to spoil the delightful surprise that is this meal. The flavours are rich and pure, distinctive yet a part of an overall flavour that exceeds expectations. Tender, it melted in my mouth and provided no resistance to the knife. You just have to try it to understand.

To top it off, I managed to get about 2/3rds way through a portion of Sticky Pudding - warm sticky apricot pudding, vanilla ice-cream & our famous home-made caramel whip - and found it to be a wonderful finisher to the meal, a tangy counterpoint to the main course. Then I gave out, admitted defeat, and lumbered off to pay the bill, which left me decent change from the $50 I went in with.

So, to finish the night off, I dropped down a floor to Uno for a quick drink before the walk home. It was a quiet night, and the subdued atmosphere was really pleasant, with some good music piped through pending the arrival of the DJ. I left shortly before that, but have heard that it's a great place to be when the mood is bouncing.

Overall, this would have to be one of the better 'semi-formal' dining venues I have had the pleasure to experience in the last decade. Well worth the trip, the parking can be an issue. Suggest that if you are going to be heading in after about 8pm, think of umbrellas, as close parking may be an issue later in the week. I'll be back for sure!