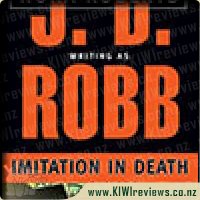 Now Dallas is in pursuit of a murderer who knows as much about the history of serial killers as she does. He has studied the most notorious and the most vicious slaying in modern times. But he also wants to make his own mark. He has chosen his victim: Eve Dallas. And all Eve knows is that he plans to mimic the most infamous murderers of all starting with Jack the Ripper...

It is still the summer of 2059 and Eve has got herself a case. With each murder, this killer is imitating another famous killer. Jack the Ripper, Al DeSalvo, and Ted Bundy just for starters. If the murders are completely different, how does Eve know that theyâ ™re all being done by the same perpetrator? Because he leaves a note at the scene addressed to her. And all of Eveâ ™s suspects are high profile people, which make snooping around to find the real killer extra difficult.

I rather liked the premise of this novel, especially as I do have an interest in murderers, serial killers etc and so it was interesting to see this delved into a little bit in this book. Throughout the book we also have Peabody studying, and ultimately taking the test for getting her Detective's badge and all the nerves etc that comes with such a big step.

I love the ending of the book, both Dalla's comments to the killer, the arrest and of course the end results with Peabody and her aim for promotion. While I didn't find the start and middle of the book anything amazing I did love the final couple of chapters.

A gorgeous children's activity series that explores a wide range of artists' work while encouraging children to develop their own skills and techniques, Get into Art! is perfect for active young artists of all abilities. Art projects are varied, intriguing and clearly explained and will act as a springboard for plenty of artistic experiments. Readers can combine their practical activity and creativity with discovering a wealth of fine ... more...