The Avengers: The Movie Storybook review 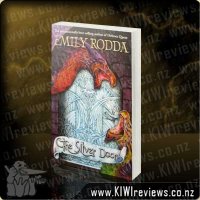 What terrors await Rye beyond the Silver Door?

Rye is willing to risk everything to save his brothers, lost in the terrifying world beyond the Wall of Weld. Sonia is determined to find and destroy the Enemy who is sending the ferocious flying beasts called skimmers to ravage the city. The companions barely escaped with their lives during their first thrilling adventure beyond the golden Door. But they won't give up. Their desperate quest must continue. Deep in the ancient heart of the Keep of the Weld, two more doors await them.

Birthdays for the Dead
Rating: 9.8

Now, I'm a big fan of Deltora Quest, so when this book caught my eye, I made sure to grab it, and I can tell you now folks, it was worth it! I was unable to get a copy of book 1, so there were a few parts that confused me, but they were only small bits, so most of the story was easy to understand. The cover design was awesome, I loved the image of the silver door, it must have taken ages to design and even longer to paint, as there are several different shades, and complex patterns that just astound me!

The character Rye had to be my favourite, he was brave and young at the same time, and he also had in his possession a small bag full of charms that gave him amazing abilities! I found that this story had a lot of links to the Deltora Quest series, for instance, the feared Shadow lord was mentioned, and I also saw the his symbol many times in the book as well.

I had a lot of trouble creating a small movie of the book in my head, the text was not as descriptive as most of the other books I read these days, so I'm afraid that it was something that made this book not as good as it could've been; then again, the story could have been made for younger reader, in which case this book is perfect!

The price of the book is great, it fits the value of the book well, although it is close to the boundaries, but it still gets a full 10/10, that's for certain. I would recommend this book for kids older than 10, just by reading some of the content in this book, I think that 10 is a good age, 9 years old at the very youngest. All in all, I would say that this book meets pretty much all expectations, and deserves a full 10.0 score from me, so I can say that If you buy this book, you/your child will not be disappointed. Enjoy!

The thrilling follow-up to The Hunt for Pierre Jnr. The Weave is left reeling after an explosion devastates the city of Busan. Who is behind it? What does it mean for the psis?

Pete Lazarus has been taken captive and Colonel Pinter is discovering the joys of rejuvenation, while the most powerful telepath ever born marches steadily towards world domination, collecting subservient Citizens in his wake. In this second instalment of the ... more...