The Invincibles #1: Power Up! review 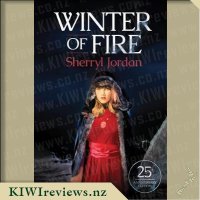 Born into a dark world trapped forever in icy winter, Elsha is a child of the Quelled, a branded people doomed to mine firestones to warm the ruling class, the Chosen. But Elsha has visions and an uncommon strength of spirit. Condemned to death on her 16th birthday for defiance, Elsha is saved when she is called to be Handmaiden to the Firelord - the most powerful being in her world, the only one with the gift of divining firestones. Viewed with distrust by the Chosen who now surround her, she has a bitter fight ahead to strive for a better world for her people.

This book was originally published in 1994 but has been brought back in a 25th anniversary edition due to popular demand.

When this book first came out, I was too young to read it and it never caught my attention when I was old enough and so it has taken until now for me to read it. When I saw this was up for review, I mentioned it to my mother and when her response was an immediate "oh yes, it's good!" so I figured why not. At the start and end of this book, there are a couple of notes from Sherryl Jordan, one being a foreward, what she has been doing since and her thoughts on Elsha and the world she lives in. The author gives a good description of a desolate word, full of dark and cold, a world where there are the Chosen, who live life well and the Quelled, the slaves.

Elsha starts young in her defiance of the world she lives in and though beaten, branded and forced to mine for firestones, her desire for a different life for her people is never quashed. Soon Elsha becomes stuck between two worlds. We meet many characters throughout the book, most, who agree with Elsha to a degree and of course, those who despise her and don't want things to change. I would have liked to have seen a map for this dystopian world that we explore with Elsha, something to give more of an idea of the span of it all, as she spends days journeying from one place to another.

The themes in this are strong, slavery, distopiya, climate change, history lied about, religion used to oppress and so on. The Quelled are such because their 'God' made it so, the women cannot eat at the same time as the men, the world is dark and cold, the only source of heat being from the firestones that are mined. Throw into the mix a bit of magic, as the Firelord is a diviner and later we see Elsha has some abilities when it comes to healing (something that is never touched on again, a shame), prophecy with her dreams and an ability she discovers that could change everything. I managed to read this in one day (breaks for tending to customers, driving home etc) and didn't go to bed until I had finished reading it, I was that keen on it.

I enjoyed this book far more than I thought I would, it's one I'll be holding onto for the kids to read and there's a part of me that would love to see this on the big screen, brought to life.

So many of the themes in this book are as relevant today as when it was first written. Climate change and prejudice based on race or class are still very real issues in the 21st century, and despite the sterling work of environmentalists and human rights activists, progress continues to be slow. Elsha, the main protagonist, is on a quest to put things right and make the world a better place by making unprecedented changes in the law as it relates to her world.

Elsha's world is an interesting place. It would appear, in this dystopian society, that the inhabited world is in reality quite small. There is the hint that some unspecified disaster has pushed the world's reset button, and in the process has killed off most of the population while ensuring that an eternal winter has established itself. To survive, a group of criminals has rewritten history, taking over as The Chosen and enslaving others, who are known as The Quelled. Over time, everyone has come to accept the myth that The Chosen are the superior race. Elsha's goal is to overturn the separatist rule and restore equality for all.

The social construct of Elsha's land is plausible and very detailed, highlighting class and gender gaps. As a Harsha, or untouchable woman, Elsha is inferior to all the Chosen and even to the men of her own Quelled. She is strong-willed, however, continually challenging the status quo and refusing to accept her lowly status. Her divining powers ensure that she will eventually rise to a position of power which will enable her to make changes in the system.

I found the book very readable, but I would like to have seen it written in the third person. As an account delivered from Elsha's perspective, it sometimes appears that she is preaching rather than telling her story. It is difficult in a first-person narrative to provide any in-depth commentary on a character without making it all about her - and although this is Elsha's story, she did strike me as overbearing from time to time. The other thing I found a little disturbing was the hint of other love interests (apart from Teraj). These fleeting dalliances added nothing to the story.

Some of the descriptive passages were beautifully presented, evoking a harsh world of mining, hunger and cold for the Quelled compared with the relatively affluent lifestyle enjoyed by the Chosen. However, it was noteworthy that furs were the bedding and garments of choice for the latter, yet there was almost nothing included about the local fauna (apart from the falcon and the horses, neither of which is fur bearing). It would have been interesting to see a map of Elsha's journeys with the Firelord. More than once I found myself wondering if the inspiration for the setting had been Australia!

I want to read this book a second time to see if I still think it works as an adventure novel. Certainly, it is useful to find stories with a strong heroine who is standing up to the establishment. Elsha is definitely a feminist and a militant one at that. I just wonder why it took her so long to speak up about the custom of making women wait to eat until the menfolk had finished!

Sage and her parents visit a bakery to film a segment for their TV show. They are in for a surprise when a treasured ring goes missing.