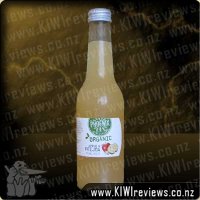 Get your feijoa fix all year round with this Kiwi favourite. Organic, New Zealand apples and feijoas make up one of our favourites.

I love feijoa juice. There's just something about the taste, and it seems like such an easy thing to turn into juice, dessert, candy etc.

I like this range of drinks, but we very rarely buy it as, for us, the price for one bottle is a bit on the expensive side, which is a shame, as otherwise we would buy it a lot more often.

We ended up getting a couple of bottles the other day, and we had one bottle left in the fridge. I didn't really feel like drinking the whole bottle in one go, just wasn't thirsty enough, but didn't want to leave any in the bottle. So I used this apple and feijoa juice in the apple and rhubarb that I was cooking. I substituted this for the water that I would usually use, and I must say, this gave a very nice result and an extra taste hit to the dessert.

I love this flavour, but it's the price that sets us back from buying it regularly.

When I'm out and about in a pub with the husband, I usually pick up a bottle of Phoenix organic juice to drink since I usually have the kid with me. The price is not bad, and it feels a bit more special than just getting tap lemonade.

This flavour is by far and away the best of the Phoenix Organic juices available. I am really a huge fan of feijoa, thanks to my husband's fondness for the fruit. Years of drinking feijoa wine, making feijoa pancakes, crumble and other desserts, have turned my taste buds to the magic of feijoa.

So when I crack open this feijoa and apple juice, my nose is immediately hit with that familiar and delicious scent. The moment the drink flows over my tongue, my taste buds come alive to the flavour of feijoa. The apple taste is also there, but it doesn't overpower the feijoa taste which is awesome. Love that this drink comes in glass as well. Glass doesn't taint a drink for me like cans or plastic can.

I am a huge Feijoa fan so I couldn't wait to try this one. This is a really nice blend of the apple and feijoa, if anything I would have liked a stronger feijoa taste to it but it was still a nice mix and very refreshing. Unlike some juices, this also isn't overpowering or have that over sugared taste which is something that normally puts me off drinking juice more often.

Over all, thumbs up from me and this would be one that I would most definitely buy again.

This was another top-rated winner in my book. Full on Feijoa flavour, which is what I like! The solids in the bottle were easy to mix into the rest and didn't have a negative effect on the drink at all.

A ripe, natural sweetness pervaded this drink, and the flavours were a perfect complement to each other. The apple acted as a good solid base with the feijoa giving the wow factor and highlights.

In summary, this is one I plan to buy plenty more of, and hope to find in bigger bottles. I want to use this in a few cocktails at my next whanau gathering. I know so many of the family who adore feijoa and fruit juice in general, as we have a lot of alcohol-intolerance in our bloodline.

I am a feijoa fan and this drink ticks all the boxes for me. I love the Organic twist as its nice to know that my drinks aren't being made from apples laden with chemical sprays.

Because these drinks are organic and contain no added flavours or colourings I am also much happier letting my children have these juices. The bottle size is perfect for my children and they can easily drink a whole bottle when out so no wastage. Also being glass at least these will be recycled.

Unlike so many juices on the market the Phoenix Organic range of juices are lovely and thick and don't leave you feeling like you have drunk some fruit flavoured water. I love the thick taste that these drinks leave you with and they are a great pick me up between meals.

I am intending to get a stash of these for the fridge in my weekly shop as they are a much better sweet alternative in the afternoons than reaching for a biscuit or three!!

The ratio of Feijoa to apple is perfect and if you like Feijoas then this is definitely the drink for you. I will definitely look out for this when in cafes and for the fridge at home.

I love all things Feijoa,and this was no exception. The flavour was a little on the 'tame' side for my tastes, but then I know I prefer a solid flavour that very few drinks can supply and still make the product affordable to the general market. In this case the sweet and tangy feijoa taste was complemented by the apple's smoothness, giving a drink that was not only frsh but also refreshing.

I was loathe to use this in any manner other than just up-ending the bottle into my thirsty mouth, but I was determined to see what else it could do... and here's what I found. Pouring half a bottle of this, a double-handful of shaved ice, a splash of St Andrew's Limes "Lime and Passionfruit Crush" and a pinch of freshly-crushed peppermint leaves into a shaker and giving it a right James-Bond'ing produced an amazingly zingy Summer drink. Throw in a few splashes of unflavoured vodka (such as McCashins 26000 Crystaline) or some White Rum if that's more your thing, and you will have something amazing to offer in a Punchbowl.

Overall, a delightful drop that I would not hesitate to recommend to friends, family or total strangers.

Vodka Cruiser is Australasia's leading pre-mixed drink in a bottle. It was launched in 2000 & is now sold in more than 50 countries worldwide. Using double distilled vodka, the Vodka Cruiser rainbow of colours and fruit flavours has grown from strength to strength.  ... more...