« The Encyclopedia of My Immaturity review

ProdID: 2879 - Tortall and Other Lands
Edited by Tamora Pierce 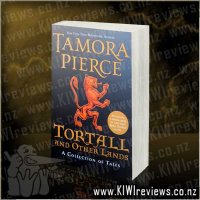 Tortall and Other Lands product reviews

Collected here for the first time are all of the tales from the land of Tortall, featuring both previously unknown characters and old friends.

Filling some gaps of time and interest, these stories will lead Tamora's fans, and new readers, into one of the most intricately constructed worlds of modern fantasy.

The last time I picked up a Tamora Pierce book was back when I was in my teens, but I clearly remember loving the few of her books that I did read, and have been meaning to read more of hers ever since. "Tortall and Other Lands" is a fascinating collection of short stories by Pierce, each of them a captivating quick read that leaves you wanting more, where you just get right to that point where the story's gotten you well and truly in its grasp when it ends. This is what I found the most frustrating about the book... I didn't want just small stories, I wanted a full book where each of these short stories were expanded into a far longer, more detailed adventure. Hopefully the author will take at least some of these and turn them into fully fledged novels, as they all had a strong storyline and intriguing characters you can't help but love and connect with, as just about all of the main characters are outcast strong female types for one reason or another, with several of them popping up in more than one of the stories.

Although I loved all of the stories in this book, some of them stood out a bit more than the others:
* "Student of Ostriches" with it's strong African feel and the gutsy Kylaia who shows that if you're observant enough, and think outside the square, you can learn plenty from even the most unexpected places.
* "Elder Brother" where a tree learns about the good and bad about what becoming human means.
* "Nawat" (probably my favourite of the entire book) with an interesting mix of shapeshifters, Royal politics, and some rather strange parenting ideas.
"Plain Magic" is a story that touches on the familiar old saying "don't judge a book by its cover" when Tonya meets a visitor to her village.
Lastly out of my favourites, there's "Mimic", where, in a village where birds are the special friends and helpers to the villagers, young Ri tries to help a bird who is extra special and strange.

While being rather light on the details, the author still makes it easy to visualise her worlds without getting lost in the heavy descriptions so many fantasy authors seem to be so fond of, as well as keeping the plots rather on the light and simple side, with potential to take them into something a bit heavier if she explored them further and fleshed any of them out into a full novel. I absolutely loved the mysterious, fascinating Darklings (who featured in several of the stories), but as each story was barely long enough to really get to know any of the characters well, I don't know whether the darkings were truly as good as they seemed, or whether there was something else to them that would maybe have them living up to their name in nature as well as in looks.

All I know is, this was a fantastic introduction to the work of Tamora Pierce if you've never tried her books before (or haven't read any for a very long time), and I very much want to go and get a pile of Tamora Pierce books so I can throw myself back into her world(s) again, this time for a much longer time! If you enjoy fantasy and are after a light, simple, easy read, then the stories in this book would be a great choice for anyone 10 years and older, with plenty of magic, adventure, good solid strong characters, dragons and other strange creatures to keep everyone happy.

Score: 9.8
Product reviews for listing 2551: The City of a Hundred Rows - 1 - City of Dreams and Nightmare -  Written by Ian Whates

Having witnessed a murder in a part of the city he should never have been in, street thief Tom has to run for his life. Down through the vast city he is pursued by sky-bourne assassins, Kite Guards, and agents of a darker force intent on ... more...