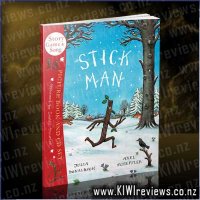 But it's dangerous being a Stick Man. A dog wants to play with him, a swan builds her nest with him. He even ends up on a fire!

Join Stick Man on his troublesome journey back to the family tree.

Julia Donaldson and Axel Scheffler's magical story is accompanied by a fun-filled audio CD that includes full story with music, the "Sick Man Song" (plus instrumental version) and a read-along version of the story with musical page turns.

The House With a Clock in Its Walls
Rating: 4.0

Being winter we occasionally use the fire (but just such a hot winter, not using much) and now if I have too I am in two minds about putting sticks into the hot flames after reading this book. It is so sad and eye opening about a father stick who goes thru all sorts of obstacles trying to get back to his family. The pictures are fantastic and so vivid and well done that they tell the story on their own. The words are told in rhyme form so its fun and playful but the message is still that sticks have feelings and are part of families and should not be used for peoples enjoyments.

My seven year old had no problem reading the story and once finished both her and her sister said we should put the sticks back outside and I was even willing too, which shows what a great powerful book it is. But then the conversation moved on to the couch the tv and everything else in the house so the line was drawn. We decided that fairies can look after the sticks that are alive and all the rest are for ours and the taking.

It was so neat that Santa got involved and that as the present he returned Stick Man to his loving family. A really fun book that makes you think and brings some extremely entertaining conversations afterwards. A great book for the family and one we will read a couple more times at least before we need to return to the library. Unfortunately ours did not come with the DVD so unable to comment on it.

We love Julia Donaldson's books in this house. From the Gruffalo, to Charlie Cook's Favourite Book, to the Smartest Giant in Town. We own quite a few of her books and always catch up on othrs at our local library.

I also have a deep respect for Axel Scheffler's illustrations. Such a clear style, always whimsical and fun. The characters come to life through the drawings and the beautiful flowing rhyme. They are a great team!

I recently read Stick Man with my daughter. The story is a great adventure. Stick Man travels further and further away from home, but will he get back? This book has everything, from love, friendship, misunderstandings and high drama. It kept us both on the edge of our seat.

I'll definitely be looking out for this at our local bookshop. It would make a great Christmas gift as well.

I bought a copy of Stick Man as soon as it came out because Julia Donaldson is one of my favourite authors. The copy we have doesn't have an audio CD but we love it.

When I first got the book I was teaching seven and eight year olds. They were familiar with the Gruffalo and several other books Julia Donaldson and Axel Scheffler had created.

Like a lot of books with rhythm and rhyme the first reading aloud to the class was rather stilted. With each reading it flowed better and now three years later I could recite it to you. I have read it so many times. This book quickly became a class favorite. The Stick Man appears in The Gruffalo's Child (another Donaldson and Scheffler book) as the toy the Gruffalo's Child constantly carries around.

Now that my eldest is three and a half she really loves Stick Man too. Her two year old sister is just starting to get into it. The favourite part for them is when Santa appears.

Every time I read Stick Man I marvel at home clever Julia Donaldson is with her writing. The plot and the rhyming are brilliantly done. Axel Scheffler is a brilliant artist and has a great way of bringing the characters to life in a magical way.

This is a wonderfully told story. The illustrations are done beautifully, and are very appealing to children. They bring the story to life. The part of the book which excited my 3yr old daughter the most was when Santa dropped in...

Imelda Staunton does an amazing job at retelling this story. And the music that plays along with her retelling involves the children more in the story. A job well done!

I found the Stick Man game to be rather slow, and didn't excite the children. It would have been better if it had a faster tempo, and if there wasn't such a long gap between doing actions.

I thoroughly enjoyed the instrumental version of the song too, and found myself singing along without the book.

There is also on the back page, a colouring in picture for kids to colour Stick Man in, however it would've been better to have it as a pull out as if we were to cut it out we would lose all the information about the author, illustrator and the Narrarator.

It's hard to believe this is Roan's last year at Jedi Academy. He's been busier than ever learning to fly (and wash) starships, swimming in the Lake Country on Naboo, studying for the Jedi obstacle course exam, and tracking down dozens of vorpak clones--don't ask. But now, someone is ... more...