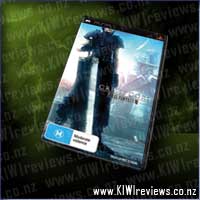 Set seven years prior to the events of the first FINAL FANTASY VII, the Shinra Company is rapidly increasing its influence through its monopoly on mako energy and military might. With the burgeoning city of Midgar as its base and symbol of prosperity, Shinra is on the verge of establishing absolute dominance over the world.

SOLDIER is a group of skilled combat operatives within Shinra. The elite within the group - those strong enough to be deemed SOLDIER 1st Class - are respected and idolized by the citizenry. Zack is a young SOLDIER 2nd Class who aspires to become a 1st. He spends his days carrying out assignments under the guidance of his 1st Class mentor, Angeal. During an operation in Wutai, a large number of SOLDIER member, led by 1st Class operative Genesis, go missing. The severity of the situation prompts Shinra executives to deploy even more SOLDIER operatives in hopes of bringing an end to the war with Wutai - and conducting an investigation into the mass desertion. The ones assigned to the mission are Zack, Angeal, and the 1st Class hero who is known the world over as Sephiroth...

What truths lie behind Genesis's disappearance? What secrets bind the three SOLDIER 1st Class operatives? For Zack, a cruel and fateful struggle awaits...

* Complete the FINAL FANTASY VII experience and reunite with the most recognised RPG characters created by world-renowned character designer Tetsuya Nomura
* Witness stunning graphics and CG cutscenes coupled with top-notch voice acting in a 16:9 widescreen presentation, made possible by the PSP system hardware
* Innovative D.M.W (Digital Mind Wave) system enhances the action-packed real-time battle system, allowing players to unleash special attacks or call upon iconic FINAL FANTASY summons
* Take on challenges with the all-new "Hard Mode" which was not in the original Japanese release
* Acquire unique accessories, items and abilities made available through 300 side missions to further enrich the gameplay experience

Final Fantasy VII: Crisis Core and a prequel to the Classic Playstation 1 game Final Fantasy VII following Zack Fair, a military man carrying out his missions assigned to him and experiences his fair share of ups and downs as well as betrayals.

This is my most favourite PSP game of all time, it is an incredible amount of fun and at its time of release I could not put down my PSP. it is not the traditional battle system of other final fantasy game.

I found this story so amazing, I could not put it down and the end had me in near tears! I do not want to spoil any thing for you so wont talk to much about the story. on to cinematics... WOW they are so flawless and amazing, I literally had save points just before every cinematic so that I could view them again and again

Overall Final Fantasy VII: Crisis Core is one of my most favourite Final Fantasy titles of all time, most certainly the best game on PSP and I am seriously hoping for a re-release on either PS vita or PS4 because I would be getting it in a heart beat! Gaming at its best.

Im a fan of the Final Fantasy series personally, generally a great story and some fantastic RPG gameplay. Final Fantasy 7 is one of the greatest of the series and as Crisis Core is the backstory of FF7 it's a great game to add to the collection.

Gameplay wise Crisis Core is a little repeditive at times and theres not quite as much to it as most of the FF series, it is still a great play though. Even if you have never played FF7 you'll still enjoy the story in Crisis Core.

There are a nice amount of side things to do and bonus stuff to get along with the good old Final Fantasy leveling. Definitley worth a play especially if you have played others in the series or FF7 itself.

Features
- The epic story continues: Following the demise of the Covenant at Halo, the Master Chief must defy the ... more...