The Caves of Steel review 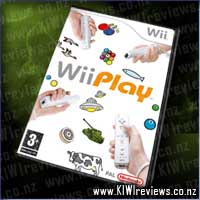 This is a Nintendo game that comes complete with a Nintendo Remote Controller.

Given that this combo is only around $15 dearer than buying a Nintendo controller alone (other brands might be cheaper), it does represent good value.

There are plenty of games included and they are simple fun, especially for younger players. IMHO they are not at the level of 'fun and replayablility' as those in Wii Sport (a really great game disc that sold only combined with the Wii consoles). However, they do achieve their objective of helping new players to quickly master the controller.

Overall, considering the effective price of the game disc - it is worth the extra if you are in the market for another controller anyway.

Set in 2054, Advanced Warfare tells the story of Private Jack Mitchell, who during a conflict against the North Koreans in Seoul, he loses his left arm and is discharged from the military. Approached by Jonathan Irons to join the Atlas Corporation, the worlds largest and most powerful Private Military Company.