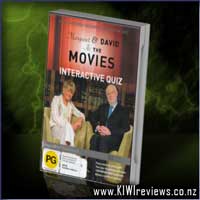 At The Movies Interactive, the new interactive quiz show, has enough to keep both film aficionados and casual filmgoers arguing for hours, but most of all, it's fun!

Playable by 2 to 20 people, catering to contestants young and old, At The Movies Interactive features 20 different games and over 2000 questions built around film clips and soundtracks, celebrity pictures and text questions.

At The Movies Interactive will test your film knowledge and put a few self-proclaimed know-it-alls in their place in the process.

I have often thought of myself as a moderate movie buff, without being obsessive... but I have been shown the arrogance of my attitude by this title.

With over 1500 questions, I would have sat through a few hours worth and been presented with a representative sample of maybe 300 over the testing period... and I am utterly ashamed to admit that I correctly answered less than 20% of them. I am humbled and ashamed... as many of my friends are well aware of my sudden urges to throw out a line from a movie and then snap around and point at one of them demanding "C'mon... name the movie..." with an occasional "...and for bonus points, describe the scene..." or "...explain the plot at that point..." or even "...and name the charatcer they were speaking to..." or some such other quip.

I found the navigation and presentation a little OTT, but hey... it's all about Hollywood so why not go OTT eh. The sound quality was good, and the movie clips were quite reasonable too. I did like the layout and design of the quiz, but I did like the fact that the questions focussed on other aspects than just the people... there were selections that covered the soundtracks, the plot, and even "Name this movie" type ones too.

Overall, this was quite a challenge, though more of one than I cared to have had... quite humbling in many aspects really. I am just glad that there were only a few close friends around to see my crumbling ego and humiliating defeat at the virtual hands of the two Australian hosts... and the only saving grace was that as bad as I did, I still managed to do better than the other players.

Float in outer space. Experience the thrill of roaring rapids. Tackle mountaintop obstacle courses. And dive into the deep to explore a leaky underwater observatory - all from your living room. With Kinect Adventures, you are the controller as you jump, dodge and kick your way through exciting adventures set in a variety of exotic ... more...