ProdID: 2325 - The Book of God and Physics
Written by Enrique Joven 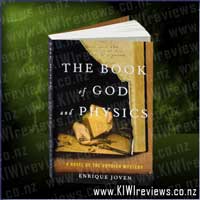 The Book of God and Physics product reviews

It is written in an unknown language and illustrated with enigmatic drawings. First surfacing in the court of Rudolf II of Bohemia, the Voynich Manuscript has developed a global cult following of cryptographers, none of whom has been able to crack its code.
But rumours abound...
The Bohemian court also gave refuge to two of the greatest and most convroversial scientific minds of all time. Is there a connection between Voynich and the brilliant scientists? Could the manuscript perhaps be codified findings, written in a special language to conceal scientific discoveries from the Church and it's brutal inquisition?
When a key to unlocking Voynich is discovered in the church where a young Jesuit teaches, he suddenly finds himself at the center of a centuries-old mystery... and now a person of much interest to a group of powerful and important men who want to ensure that ancient secrets remain buried.

There seems to be a bit of a fad with writing novels about ancient manuscripts... The Atlantis Code revolving around 'the true word of God' as noted by the ancient Atlanteans, The Lost Symbol relating to hidden Masonic wisdom and the power to reshape reality at our whim, and now this, The Book of God and Physics purtaining to an encrypted manuscript that actually does exist, but which has never been decoded. Theories abound as to what knowledge it contains, from the secret of Alchemical Transmutation to lost arcane wisdom.

Personally, I think this was one of the most original and inventive of this new genre, since it takes something that has a factual basis, but currently can not in any way be proved right or wrong, since the manuscript it revolves around is yet to have even the smallest portion decrypted and made coherant. Cryptographers and conspiracy theorists alike will have a ball with this book.

The plot is well developed, and moves along at a good pace. There are plenty of twists thrown in, some far more shocking than I would have expected. The characters have a good depth to them, deep enough that they can be identified with and attract our sympathy or enmity, but not so developed as to flood us with unnecessary details not relevant to the plot. I had to laugh that the author wrote in a small cameo appearance for himself too, when the key players came to visit at the establishment where he works in real life. Seriously dinky, a literary easter-egg.

I found the book drew me in from the start, introducing me to yet another 'mysterious document', yet one that I could research for myself. That alone, for me, was clever enough to bring me further into the plot, since I could check many of the references and find them consistent with the plot. It almost makes me wonder if the conclusion isn't a genuine fact, somehow leaked to the author, since it just 'fits' so well.

Overall, this was a very entertaining read, so enthralling I actually delayed the review so that I could read it twice. An effective plot, with just enough characters thrown in to keep things chugging along at a good pace. Too few characters would have them rushing around too much in an effort to keep the plot interesting, but conversly too many would have the plot too fragmented to keep track of easily. This one fits right into 'the Goldilocks zone' for me - not too much, not too little... just right.

Kelly Swift is trying hard to be an average teenager, to fit in. But every day her powers are growing: she can run ... more...