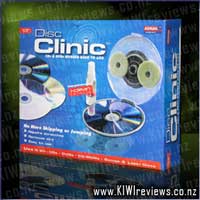 Restore jumpy CDs and DVDs in seconds. Our ingenious repair kit gets rid of the dirt surface scratches and finger prints that make discs skip and jump - and nurses them back to perfect play.

•  Just spray on the cleaning solution provided, pop the disc into the "clinic", gently turn the handle for 30 seconds - and that's it! Your disc is pristine and ready to play.
•  Use our Disc Clinic to optimise play and protect data on all types of disc - software and MP3 CDs, data storage, video games, DVD's...
•  The Disc Clinic kit comes with cleaning solution and a brush for maintaining the unit's vital cleaning pads
•  No batteries needed
•  Disc Clinic offers the most cost-effective way of keeping a treasured CD or DVD collection in tip-top condition: one kit will perform hundreds of repairs.

Ok so we all know that CDs, DVDs and the like all scratch and scuff easily. We know that with little fingers they are bound to get marks on them that will prevent them from playing right through, we also know that big fingers will mark our precious discs too.

The Adman Disc Clinic, like many products promises us the world and everything in it. This unit will perform hundreds of repairs it says. Ok so it will perform 100s of cleans most definitely. Repairs not so much.

We found the disc unit did remove most marks off our DVDs, and yes some that perhaps got a little fuzzy in places now do play without to much effort. But the unit did not repair light scratches or stop any of our dvds that were jumping about from, well, jumping about.

Unfortunately we don't rate the disc cleaner highly. We do recommend if you're still wanting to try it, perhaps a similar cheaper version as a one off that only repairs a couple of discs (found in some stores) would be a good idea first... Just to see if it will work for you.

If buying to repair: don't hold your hopes to high.
If buying as a disc cleaner: then most definitely worth it... although a soft cloth also does the same trick.

Tough ask for any thing to sort out the disks of many New Zealanders. We have them all over the floor in the car, down behind the tv and let's face it, kids aren't the gentlest with this kind of thing. We tried our worst disk in it and just didn't get any joy out of it. The scratches remain and the disk can't be replaced. When it came to cleaning some of the others and the "light" scratches, it worked well and we got to listen to some sounds that we haven't heard for ages.

I like that it doesn't run on batteries but am a little worried about the things it says it will do.

Alas, I must have received the dud of the batch, because the results I got were somewhat less than overwhelming.

After much digging back through my disc archives, I found a disc that had a surface covered in very shallow scratches... so shallow in fact that I could easily see them, but not feel them. The effect was more of a fogged window than anything else. I figured this would be a breeze for the machine. To test, I attempted to read the disc in my PC, to no avail. Utterly unusable.

After reading the instructions carefully, I processed the disc in the ADMAN Disc Clinic... and could see no significant improvement after 30 seconds of winding the handle. Figuring that the disc couldn't get any more stuffed, I gave it a full minute more... and found the disc reasonably improved, although the scratches were still evident. A further full minute showed significant visual improvement, and at last the disc would at least be recognised in the computer, though it still had trouble in a few places.

I figured "What the heck..." and gave it another full 2 minutes in the Disc Clinic. The disc finally appeared to be almost completely scratch-free, and I was able to read 97% of the data back off it in the PC. That's pretty good, though hardly within the 30-second specs stated on the box.

I attempted to then repair a far more deeply scratched disc, with no success after over 10 minutes of processing, with a pause every minute to apply a fresh squirt of solution. This makes it very clear to me that this machine is more of a light polishing device, than a repairer. I had though the two rotating disks inside the Disc Clinic's lid were sanding or grinding blocks, but no... too soft and pliable, and doesn't make very firm contact with the disc.

Overall, though it does what it does with some success, this is not something I plan to use on a regular basis, as I take care of my discs in the first place. Any accidental damage tends to be too severe for this unit to fix. However, if your disc are used in the car, and suffer the occassional slight abrasion, leading to the odd track-skip, this could be just what you need to repair it before it becomes bad enough to require replacement.

Having seen many solutions to the age old problem of scratched discs I was interested to see how this option from Adman would work.

So firstly I grabbed a couple of examples for scratched discs. 1 that was so scratched you could hardly see a refelctive surface, and a second that was moderately scratched. The first disc could not be read at all in it's current condition, the second (which was a home authored DVD video) could be played, but had some data glitches.

First up was the moderately scratched disc. Following the instructions i sprayed a couple of sprays on the disc surface and then placed it in the unit face up and closed the lid. Then placing the unit on the table I proceeded to turn the handle for approx 30 sceonds. After the time was up I took the disc out and had a look at it. While I could still see a few scratches the disc did seem a little shinier, so I took the disc and put it in the DVD player and let it run, well what do you know it ran with a lot less data glitches this time around.

Next up was the really bad disc, once again I followed the instructions. 30 seconds later I took the disc out and had a look at the surface, to bve honest I couldn't really see a difference, so I put the disc on the old PC and tried to read it, still no joy, but then I didn't really expect that, as it was quite badly scratched.

So overall if you get to your disc before it gets too bad there is a good chance at saving it, but leave it too long and it's a hopeless case.

My daughter is a sod for leaving CDs lying around out of cases and so we tend to have a lot of very scratched CDs everywhere - especially in my daughter's room, where a number of CDs are pretty much unplayable. So, to be fair, repairing the CDs was a big ask for any CD repairing tool.

The instructions were basic to say the least. How many sprays of the cleaning fluid should be used. Should the CDs be face up or face down. How long should one rotate the disk in the cleaner? None of these I felt were clearly expressed - and with a number of modern CD-Rs around, it can be a bit difficult to tell the write side from the right side. So, using a bit of common sense, I put the CD write side up. With a quick spray and a quick spin one was able to remove the dust and grime very easily - but were any scratches removed? Hard to tell really. The CDs used did skip and jump less than before but was not as perfect as a new disk.

But as I said, trying to repair my daughter's disks was a tough job and I wasn't expecting perfection for such damaged disks. I guess this will be better for grimy disks and very light surface scratching only. Beyond that, some disks will just be too beyond repair to make much difference.

To sum up - perfect for many disks, just don't expect miracles on very damaged disks.

A professional airbrush finish has never been easier with the Paint Sprayer Pro from ADMAN. It allows you to spray swiftly and accurately, covering large and small surfaces inside and outside the home.

For a fast and flawless pro paint job, the plug-in set comes with a spray gun and three different spray settings: horizontal and ... more...