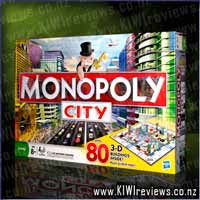 Disclosure StatementFULL DISCLOSURE: A number of units of this product have, at some time, been supplied to KIWIreviews by the company for the purposes of unbiased, independent reviews. No fee was accepted by KIWIreviews or the reviewers themselves - these are genuine, unpaid consumer reviews.
Available:
at qualitry retailers

Build on every turn and watch your city fortune grow! In this metropolitan edition of Monopoly, be the top property developer and watch your dream city rise before your eyes. What will you build - houses or industrial complexes, schools, skyscrapers or stadiums? The choice is yours.

But watch out - a rival developer could build a sewage plant right next to your prize property and make its value plummet! So build wisely and rake in the rent - and the prestigious MONOPOLY tower could be yours!

Features 80 3-D buildings so you can develop your MONOPOLY property.

And so I finally find my favourite Monopoly game.

This game takes your all time classic, throws a city at it, and makes it harder to roll the dice on the board. All the while making the game that much more painful for someone who lands on your property. Think tens of millions. Oh yeah.

Lots of new additions but fairly easy to pick up on what does what, much fun indeed placing a sewage plant on a high-end property, owned by someone else. =D

The Rent Dodge card was a brilliant addition, landing on free parking no longer means you get nothing, unless someone beat you to it.

All in all if you enjoy a game of Monopoly, I -highly- recommend Monopoly City.

All I can say is WOW!!! I thought Monopoly would always be Monopoly, but then Hasbro go and throw us a curve ball that results in the birth of Monopoly City.

When this was first described to me it was explained as Monopoly meets Risk, and personally that's the best description of it I have heard. While there has always been a certain element of strategy to the previous version of Monopoly, Monopoly City has strategy written all over it. Now not only can you build more unique structures and buildings, but each has an effect on not only your income but also that of your opponents and depending on what you place and where you could either help or hinder yourself or your opponent, so strateic thinking is even more of a requirement than before. This also means that there is a bit of a learning curve to this one.

Now I always sucked at Risk, and so I wasn't surprised when I totally crashed and burned my first game, but I feel with more practice (actually a whole lote more practice), I might have a chance of actually finishing better than last. But I must say that even though I did lose my first time out I did very much enjoy myself and I look forward to more games of this.

Having played Monopoly since the days of sitting on my daddy's knee I have always found the versions to be somewhat all the same, keeping the old magic alive and keeping it familiar and easy to teach to the younger generations. Now, after nearly 75 years, there is a major upgrade and shift in gameplay.
With a far more modern feel, new rules and a whole new way to play where you can not only win bigger than ever, but you can also lose bigger than ever before, and can even play to win by killing off your opponents' ability to earn rent!
New buildings to benefit you, harm your opponents, or boost your rental income by an astounding amount, and 'districts' instead of mere streets, all add up to something that sounds so familiar, but plays so unlike anything you have encountered before.
By far the biggest factor in the new game is the new buildings you can use. Residential buildings earn you basic income as before. Industrial buildings are more expensive to build, but are unaffected by hazards. Stations are no longer specific squazres, but can be built on any district at the instruction of the electronic 'trading unit'. Stadiums are brilliant, in that they boost your 'salary' every time you pass 'Go' and they dont count towards the building space limit. Skyscrapers are like super-hotels because once you own all the districts of a single colour you can build one and it immediately doubles the rental income of the entire set of districts, unless you are lucky enough to buy the Monopoly tower which doubles the rent on all of the districts you own. Finally you get the Bonus and Hazard buildings. Bonus buildings secure your districts against Hazards, which immediately make all your residential properties worthless by reducing their rental value to zero. Hazards also prevent you building Bonus buildings. You can have one or the other but not both. Suks!
I got some of the family around for a bourbon, beer and boardgames night to help me playtest this one. After 2 hours we were still having a ball but the booze was having it's effect so we called it quits for the night. Typical, the youngest player, who had never even set eyes on any Monopoly version before, kicked all us old-farts' butts by miles, by basically stacking our districts up with Hazard buildings within the first hour, and snapping up the Monopoly Tower building after about 20 minutes. Totally rigged, I tell you!
All in all, this is by far the biggest new swing to hit Monopoly in two generations, and its a real welcome stunner at that. Still has enough of the old to keep the oldies playing it, but has stacks of new playability to it so it will give evn the most jaded player a fresh experience. Time to trade up to the newest thing on the block!

Guide your intrepid explorers through the cursed swamp, collecting treasure and avoiding obstacles!

Every turn in Ghosts of the Moor, you move one of your explorer pawns forward. If you leave a space containing a tile and no other explorer, you must pick up that tile â" which is good if it's a treasure and not good if ... more...