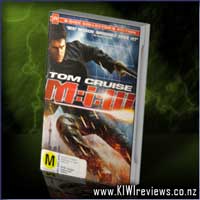 Disclosure StatementFULL DISCLOSURE: A number of units of this product have, at some time, been supplied to KIWIreviews by the company for the purposes of unbiased, independent reviews. No fee was accepted by KIWIreviews or the reviewers themselves - these are genuine, unpaid consumer reviews.
Available:
All good DVD Stores

Tom Cruise, the most exciting and successful star in the world, returns to one of his signature roles, Secret Agent Ethan Hunt, in "Mission: Impossible III." In this pulse-racing, mind-bending action thriller, Hunt confronts the toughest villain he's ever faced - Owen Davian (Academy Award winner Philip Seymour Hoffman), an international weapons and information provider with no remorse and no conscience. The film is co-written and directed by J.J. Abrams, who brings his unique blend of action, character, comedy, and drama to the franchise. The millions of loyal viewers of Abrams's landmark creations, the television series "Lost" and "Alias," know what to expect: an enthralling, intricate story with an unexpected and arresting payoff that satisfies on every level. With "M:i:III," Abrams and Cruise turn the spy thriller on its ear as they hark back to the best aspects of the original TV series that inspired the films - a well-connected team of agents centered around a bold and heroic leader, the most exciting action stunts imaginable, and elaborate twists and turns that keep you on the edge of your seat. "M:i:III" is the action movie audiences have been waiting for.

DISC ONE:
• Commentary by Tom Cruise and director J.J. Abrams.
• The Making of the Mission.
• Deleted Scenes.
• Generation Cruise.

I have been a fan of Mission Impossible since I first saw the original TV show many years ago. But I have to admit when I heard that Tom Cruise was going to star in a movie version of MI I was a bit skeptical as up until then the only real action type movie he had done was Days of Thunder, well I have to admit that he did a pretty fair job and since then we have seen him star in more action movies.

Now here we are with MI:III and this one I have to say is my second favourite MI movie next to the original MI movie. The stunts and action sequences in thise movie, whilst still being extrreme are more believeable than some of those done in the second film. Also a different turn in this movie is a look into Ethan Hunt's home life and it helps make the characters a wee bit more believeable.

The special effects in this are of a high standard and most times you cannot differentiate between physical shots and CG shots.

The added bonus of the special features in this set makes it even more worthwhile and also provides some interesting insight into the goings on on a MI movie set.

And I leave you with one final question.... Will there be a MI:4?

Watch the movie and make your own mind up......