« George of the Jungle review

Any Given Thursday review 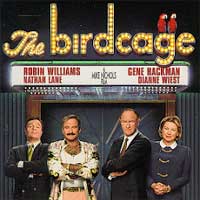 Robin williams delivers his funniest performance since Mrs Doubtfire in this non-stop hilarious comedy audiences and critics adore. Williams stars as Armand, the outlandish owner of a wild Miami Beach nightclub, whose partner Albert, is also the starattraction at the club. gene Hackman (Crimson Tide) is the ultra conservative US Senator Keeley, who faces political problems when his closest political ally dies in bed with a prostitute.

When Armand's son Val, announces his engagement with Keeley's daughter, the scene is set for a riotous comedy of errors. Keeley sees the wedding as the opportunity to restore political fortunes by promoting "traditional family values". If he only knew what sort of family his daughter was marrying into!!

Put the families together and watch the sparks fly in this hilarious battle of the three sexes!

A superbly funny movie that I have enjoyed watching a few times since it was released.

Robin Williams is remarkedly restrained (compared to some of his work) as a gay nightclub owner. Partnered with a flamboyant Nathan Lane these two make a hilarious couple. Throw in a straight son, Gene Hackman in drag and you have the making of a very funny movie.

After the third watch I still laughed at some of the scenes. If you have a movie night with friends, a nice meal, a few drinks and this movie, then expect many laughs.

Robin Williams as a gay co-owner of a cabaret nightclub is just a scream, darlings! With Nathan Lane as co-owner and lead-singer on stage, Hank Azaria as their man-sevant Agadore (He Who Can't Wear Shoes), and a cast of drag queens, cross-dressers, and tight-ass polititians, this is a great comedy! Right up there in the Non-Straight Hall of Fame along with To Wong Foo and Pricilla, Queen of the Desert.

The story is thus, William's character had a fling with a woman many years ago, 'to see what all these straight men rave about', and ends up with a son. Now grown to young-manhood, the son plans to marry his College sweetheart, who just happens to be the daughter of a leading-light in the Right-Wing Moralist political line-up (Played by Gene Hackman), who is fast-tracking to congress. Having a High Moral Level image, Hackman gets a shock when finds out daughter wants to marry, then a right-hard shock when his politcal running-mate is found in bed, dead, with an underage minority-group hooker!

With no 'normal' parental family unit for the prospective son-in-law, all hell breaks loose as Williams tries to teach Lane how to 'go straight'...

A laugh a minute, after the first half hour, this was one of my favourite movies, and deserves a place in my collection... if I can a copy now.

There are heroes. There are superheroes. And then there'sâ¦ HANCOCK.

With great power comes great responsibility - everyone knows that. Everyone, that is, except Hancock. Edgy, conflicted, sarcastic and misunderstood, Hancock's well-intentioned heroics might get the job done and save countless lives, but always seem to leave jaw-dropping damage in their wake.