« The King of Space review

I Wonder why Animals are Amazing review 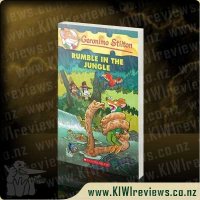 I, Geronimo Stilton, was off to the wildest part of Brazil -- the Amazon jungle! I ended up on a hunt for a rare crystal treasure, which was stolen from a native tribe in the heart of the forest. I'd encounter alligators, snakes, piranhas, and other dangers on my way. Holey cheese! What an adventure!

This is the second Geronimo Stilton book that I have had the pleasure of reading with my little Mr 4. The first one we read was The Journey Through Time and it left a lasting impression on us. I have got to say that we are now hooked and it is now something that we both look forward to each night. The only issue is, how many chapters we can squeeze in each night! The first book left quite an impression on us and left us wondering if the next book that we read could be as good. I don't think that this book had quite the same initial appeal to me as the other one as I am not so familiar with Brazil. To my son, it was another Geronimo Stilton adventure, so it was very exciting.

We enjoy the illustrations that we have come to love with Geronimo Stilton books. We also like the way certain words are enlarged and given a variety of font and colour effects to enhance them for the reader. My son is too young yet to pick up on what these words say but he likes it when I point out any particular words of note.

With Rumble in the Jungle, I kept waiting for something to happen. It turns out that the "something" that I was waiting for, was in fact the adventure itself. I felt like it was building up to something but was very slow about it. Even at the end, I was left wondering a bit about why the story had gone the way it did. There is something so loveable about Geronimo though, that I still loved the book and the experience of reading it.

Mr 4 is very interested in learning about countries around the world and we took quite a bit of time while reading this book to find out where Brazil is and to learn a bit more about it.

I did say that the first book I read left a lasting impression on us and it set a high benchmark for me to judge the rest of the series on. Rumble in the Jungle, didn't get up to the same standard as my first experience but it kept the interest of Mr 4 so I guess that is the main thing that matters.

As a Geronimo Stilton book I had expected extravagant fonts and multiple colors, but this book has surpassed itself; it has more pictures, more mystery, more humor and more fonts than any other Stilton book I have ever read. In this particular edition Geronimo has ventured into yet more danger and excitement than all his other adventures, it started with emails...

The amount of text in this book is minimal yet still conveys a complex message and still includes the excitement that makes other books a joy to read. The mysteries in this book are extreme and there are many clues that point to the answer (well hidden of course) that lie elsewhere in this story. The events in this book happen sharp and fast and the plot moves at a brilliant pace. The careful use of minimal text help this book to stay sharp and the book isn't too complex for younger children to read.

This book is based on some of the true things that happen in this world, tradesmen and other people seek the sacred or important treasures of native people for their own gain and doing so also destroy the forest for money. This book carries a true and important message.

This was our first Geronimo Stilton book, Mr almost 5 has just began to enjoy chapter books and I was so pleased with this book. The book is aesthetically pleasing. Its bright and colourful, and uses good quality paper. What I love most is the font and use of colour with the text. This makes it interesting to read, and my son loved looking at the words with me. These reasons along, I would purchase more of these books.

The story line is engaging and interesting for children, it seemed to be pro-longed in some parts, but the other aspects kept my son entertained. Its very educational in a fun way and it lead to lots of questions from my son regarding Brazil, he had no previous knowledge of Brazil.

The modern items used through the story line are commendable, I loved the use of e-mail and laptops. The real life scenarios are fantastic at airports etc as it allowed my child to think of him self in that kind of environment.

Overall this was fantastic, and I cannot wait to get some more Stilton books to explore with my son!

My daughter loves GS and has for several years so has read a giant selection of his books. I too have read a lot of them and while I find them enjoyable as there is so many of them you do often find that they all seem the same. This one seemed to take a different line where normally Geronimo is off solving some mystery in a detective sort of way whereas in this one he was just going off on an adventure himself.

As his friends thought his life/mousebook page was boring they thought he needed some adventures so they sent him off to Brazil. They played some tricks on him so that his adventures would be more extreme, however if you were clever you would of noticed this straight away when they got to Brazil as the picture gave away the clue. My daughter picked up on this straight away and had told me to watch out for it so I had my eyes widely opened while reading waiting for the clue.

The only real action/mystery bit happened right at the end of the story and was over in one chapter unlike most of the GS books where the mysteries are the heart of the story. I thought they could have focused more on this part too as it is always exciting waiting to see if they will solve the mystery or defeat the baddies. The main focus was on getting photos of Geronimo doing things that were adventurous to make his mousebook more interesting. It does have a good message about nothing being impossible with the help of true friends and the dangers of being boring and never trying anything new.

As with a lot of Geronimo Stilton books it gives a lot of information about the country they travel to Brazil, showing some of the places there, telling us the capital city and about the rainforests and the animals that live there. It also gives you an introduction to the portugese language which my daughter really enjoyed. She wants to be a traveller when she is older so loves learning about interesting countries.

My daughter is a huge fan of Geronimo Stilton, and I have been as well. I do find his books to be a little silly in places, often throwing in chapters of slapstick where it doesn't really add to the story. But otherwise the tales are fun, and he is a good role model. I love that he is always scared, but he always goes ahead and does the scary stuff anyway. What a great way to be! We could all learn to live by that!

This book however, frustrated me a bit more than the others. It was a little predictable to me, though my daughter couldn't see the glaring plot line at least. Also it seemed like the story was just rolling along and not really getting anywhere. Eventually after page 60 we got to a point where I thought "Hey, is this the actual point of the story?"

But in the end it seemed that the only real point of the story was Geronimo's Mousebook page being as boring as his life (which his life is never boring!). Personally thought he was a bit too forgiving too quickly as well. If my friends did what they had done to him, I would have been livid for quite some time. Only other gripe was that some of the words and names were a lot harder to pronounce than normal. But I did love learning a bit about Brazil. My daughter loves Brazil and wants to visit there one day, so it was neat for her too.

Score: - pending -
Product reviews for listing 8576: From the Blitz to the Burmese Jungle and Beyond -  Written by Brian Hennessy with Karen McMillan