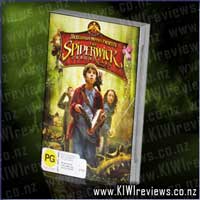 From the beloved best-selling series of books comes "The Spiderwick Chronicles," a fantasy adventure for the child in all of us. Peculiar things start to happen the moment the Grace family (Jared, his twin brother Simon, sister Mallory and their mom) leave New York and move into the secluded old house once owned by their great, great uncle Arthur Spiderwick.

Unable to explain the strange disappearances and accidents that seem to be happening on a daily basis, the family blames troubled child Jared. When he, Simon and Mallory investigate what's really going on, they uncover the fantastic truth of the Spiderwick estate and the creatures that inhabit it.

Many of us have grown up, surrounded by the tales of an imaginary, invisible, magical world that blends in with ours, seen only by those with a special "gift" (or, in this case, those with a magic circular stone, or who have been, errr, fortunate to be spat in the eye with disgusting goo by a Hog-Goblin *ugh!* I'll take the stone thanks!).
When the power of knowledge of the fairy world is placed within the pages of "The Spiderwick Chronicles", all hell breaks loose, led by the fearsome Ogre, Mulgarath (played by the talented Nick Nolte, who really brings this character to life). Freddie Highmore (also known for his roles in movies like: "Five Children and It"; "The Golden Compass" (as the daemon, Pantalaimon); "Arthur and the Invisibles"; and "Charlie and the Chocolate Factory" - definitely a talented lad to keep an eye out for!), plays the troubled Jared (along with his animal-loving, bookish twin brother, Simon), who finds the powerful book, bringing chaos to his family when he opens it, learns the knowledge within its pages, then foolishly takes it outside the "protective circle".
With the help of tiny Brownie "Thimbletack" (gifted with the voice talents of Martin Short) and the bird-devouring Hog-Goblin, "Hogsqueal" (voiced by Seth Rogen, from movies such as: "Shrek the third"; "Horton Hears a Who"; "The 40 Year Old Virgin"; and "You, Me, and Dupree"), Jared and his family set about protecting the book, while also trying to deal with damaged relationships within their own "protective circle".
Having not read the books (although I am now seriously considering fixing that problem), I can not compare them to the movie, but rich as it is with fantasy and adventure, "The Spiderwick Chronicles" will captivate both young and old. However, there are a few scenes where younger children may end up diving for cover... even my 8 year old found a couple of scenes a bit too much for him. The animation I found smooth, and rather enchanting (in places anyway... I certainly wouldn't call Goblins and Ogres "enchanting"! LOL!), kind of making you want to take a much closer look at the next bunch of flowers you come across! A great movie to add to the collection, whether or not you have children as members of your household.

Anyone got any tomato sauce or salt to spare?

Score: 9.0
Product reviews for listing 7578: War on Everyone
Directed by John Michael McDonagh

War on everyone follows corrupt cops Terry Monroe (Alexander Skarsgard) and Bob Bolano (Michael Pena) as they break the law for a living in New Mexico. Terry is an alcoholic who loves Glen Campbell, and Bob is a closet intellectual who loves his wife and kids.