« The Brave One review 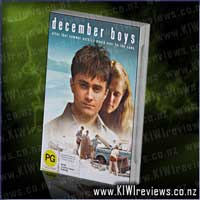 After That Summer Nothing Would Ever Be The Same

They share the same birth month, so the orphanage calls them the December Boys. But these teens Maps, Spit, Sparks and Misty, have much more in common. With no hope of ever joining a family, they form their own familial bonds.

Then the unexpected news comes that a young couple may adopt one of them, and the long-time pals share something else: a rivalry to be the chosen one.

I liked this movie. It wasn't life changing or particularly profound, just nice. I will admit that I got it out because of Daniel Radcliffe, who I will forgive almost anything (acting included), but he did a lot better than I expected. A solid story and a few hearty laughs. I definitely didn't regret watching it.

A very touching story of 4 orphaned boys who go on holiday from the convent hoping to be adopted. When the youngest is accepted for adoption, the other 3 congratulate him, however he decides he already has a family and the 4 boys stick together. It is a very touching and believable storyline, and without giving the ending away I had a tear come to my eyes.

Perhaps Daniel Radcliff has suffered the same fate of so many child stars, being type-cast at an early age and thus being relegated to roles that never seem to really fit him properly, a bit like a hand-me-down jacket.
After the Harry Potter movies, it's hard to see Daniel as anyone but the magical prodigy, and quite difficult to really see him as an awkward teenage orphan trying to find his way in a tiny Australian coastal settlement in (I am guessing) the late 40's or early 50's. This one one tiny bug-bear with me, the way the movie tried to portray an era gone by, but didn't bother to tell us which era it was. The aging of the soundtrack gave no firm clues, as it was a hodgepodge of stuff from a number of decades, some of which was obviously re-performed in an older style. A small thing maybe, but it was one of those back-of-the-mind itches you can't really scratch.
Despite the sometimes weak performance from Radcliffe, he did pull it off fairly well for a medium-budget Australian film I think. His dialog was minimal, which saved us hearing his UK accent too badly, but the raw emotion he put forth after the heartbreaking events he suffered through was clear and extremely effectively put across. There was no denying his commitment to the role, just the expertise of the execution. This is something I am sure he will improve on greatly if he is given more broad-ranging roles.
The story, as narrated by "Misty" was quite poignant and had a lot going for it, especially if you can remember that era. if you can't, then maybe you'll understand why gramps lets a tear trickle out when he recalls his youth, they were very different days to the rush and bustle we live in now.
If you want something a little lighter to watch as the nights grow colder, you'd do well with this one. Not to everyone's taste for sure, and probably would never have left Aussy shores if not for Radcliffe's name topping the bill, but still, a good view for those who like that kind of thing.

It's nine am. You've just dropped your kid off at school. Pickup is at four. No one knows where you are, and no one needs you. So what now?