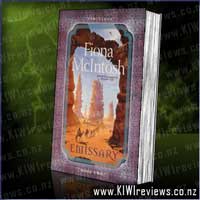 Odalisque Ana is resigned to life in Percheron's famed harem and has little more than a blood-soaked veil to remind her that Spur Lazar, the man she loves, is dead. She is closely watched by the scheming Grand Master Eunuch, Salmeo, and the cunning and cruel Valide Herezah. The Valide, unhappy at Ana's influence over the young Zar, contrives a shrewd plan to bring about the beautiful young woman's demise.

But greater forces are at work. The demon Maliz has taken the guise of Percheron's Grand Vizier in order to stalk Iridor, the traditional accomplice of the Goddess. And a war is brewing. A long-time enemy, Galinsea, intends to exact a vicious blood price for the death of its crown prince, Lucien, at the hands of the Percherese.

However, the only person in the Stone Palace who can undertake the dangerous journey to Galinsea and negotiate for peace is about to die-

And so the battle continues. The players for this particular episode of the war between Maliz and Lyana move closer to where they need to be, all the while trying to deal with the interference of the threat of war between Percheron and it's long standing enemy, Galinsea. Lazar, thought dead by many, finally reveals his secret, and Herezah starts to reveal a somewhat different, friendlier side of her personality. Iridor has well and truly risen, frustrating Maliz no end as he frantically searches for this lead to Lyana, the one person everything points to being the Goddess' Messenger obviously far too much of an idiot to possibly be the one he seeks. As for Ana, she is left with trying to cope with the feeling of being betrayed by all of those she trusted, unable to escape in any means, and now asked to rise to a task that will hopefully stop the threat of one war, while bringing things several steps closer to the other.
As with Odalisque, Emissary is full of twists and turns that kept me hooked from the first page, til the very end of the last. In some ways, it was a relief to finish, as it meant I could move onto the last of the trilogy, Goddess, but at the same time it was disappointing to close this book, knowing there was only one more book to go. McIntosh does a wonderful job in this series at keeping the reader unsure of how things will turn out, who plays what part, and painting the world her characters live in, without going overboard in heavy detail. If you've read book #1, then Emissary is a must. But if you haven't, then I'd advise going back and reading it, as this is definitely not a series where you can just jump in part way through, like you can with some.

In this essential new collection of interviews, Noam Chomsky explores the world's most pressing questions with his trademark clarity and insight.

The result is an illuminating dialogue with one of our leading thinkers and a startling picture of America's relentless pursuit of power and its catastrophic consequences.