« Pirates of the Caribbean : 3 : At World's End review 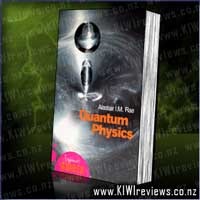 With a minimum of maths and plenty of common sense, Rae explains the science, the philosophical problems and the revolutionary potential of this exciting branch of physics. Exploring the duality of waves and particles, the great minds behind the great ideas and the astounding possibilities of a quantum future, this accessible guide is the perfect introduction to one of the most important theories of all time.

Ripley's Believe It Or Not! Expect the Unexpected
Rating: 8.8

I love high-brow science... especially when it's something I can grasp without having to delve into reams of maths. There's nothing so off-putting for me as a book that looks more like a statistical analysis of the air bubbles in a bottle of soda.

First off I have to make something clear... this is NOT 'casual reading' in any sense of the word. You have to have some science background to really 'get' this book... the basics ARE basic... but that's a relative term. Flying a light aircraft is 'basic' compared to piloting a commercial airliner, but it's still not something you can go do a weekend course on, get your little certificate, and go hire a plane. If your limit is the understanding that an atom is made up of some electrons like little balls spinning around a bunch of other balls clumped up in the middle, like planets orbiting the sun... then you're going to find this book a real noodle-bender... because after chapter 1 explains, introduces, defines and describes the units of measurement used in Quantum Physics, chapter two starts off by beginning tear that model of atomic structure apart and show why it's just a convenient convention, with no more substance than... well... about anything really. It's basically the physics version of "See Spot Run".

As the book progresses, it builds upon the concepts covered in previous chapters to take us from "What is electricity" through to "What is a semi-conductor and how does it work" and even into the realm of true quantum computing, although at present our level of technology has us just at the very start of such things. There is even a chapter on quantum encryption, though it's still in its infancy.

Overall, even though I found the book stunning reading, and knew at least a fair chunk of it already from my own studies into the topic, I found quite a few new, thought-provoking concepts to mull over. Yes, it titles itself as a 'Beginners Guide' but please, I urge potential readers to keep in mind that it is quite heavy going in places and may be something you want to skim-read, then use as a guide to further research, and come back to later once you have a better grasp of 'the basics'. If, however, you are a budding Einstein, then tally-ho and don't spare the horses, dive in, the quantum foam's fine.

"According to the heathen legend, Lorandranek, the last king of the Harshini, sired a half-human child. They call him the demon child ..."

The Sisters of the Blade rule Medalon with an army of elite Defenders to enforce their oppressive rule. R'shiel Tenragan and her half brother, Tarja, find themselves caught up in the political intrigues of the First Sister - their mother Joyhinia. R'shiel is to be shipped off to a ... more...