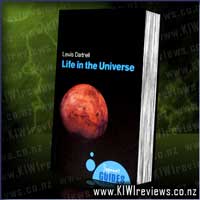 The study of life and it's existence in the universe, known as astrobiology, is one of the hottest areas of scientific research today.

Dartnell discusses the latest theories on what 'life' is, and where in the universe it might be found, and introduces some of the most extreme lifeforms on Earth - those thriving in boiling acid or huddled around deep-sea volcanoes.

Taking us on a sweeping tour of the solar system and beyond, he reveals our profound connection to the cosmos, and considers one of the most pressing questions facing scientists today: "Is there anything out there?"

Now if you have any interest in extra-solar life at all, to any degree, you've probably seen movies such as 'Alien', 'Contact' or even the classic 'Close Encounters of the Third Kind', where we are a spacefaring race and stumble across something that likes to eat us, or we get a message from deep space to build a machine, or they little BEMs drop in for a spot of tea and an afternoon of recreational human-probing... it's unlikely any of those will happen within the foreseeable future... except maybe the last one...

But for those of us who love to explore the universe with a probe that never need refueling, course adjustments, or armour-plating - the human mind - this book is about as close to 'mission-critical equipment' as we're likely to get in our lifetimes.

The book starts with a detailed, and some might say somewhat long-winded, explaination of the many potential definitions of 'Life' and where the grey line is between 'self-sustaining chemical reactions' and 'lifeform' is currently being drawn. After that comes a chapter on Earth's most wierd creepy-crawlies, the Extremeophiles. These are living creatures who live their days in environments no human could stand for more than a few seconds, if even that, without seriously determined fashionware, such as ceramic thermal shells or deep-sea submersibles.

Then comes the really hard stuff... a 45-page dissertation of the solar and galactic habitable zones, why they are, how big they are, and why they vary. If your brain has made it this far without leaking out your ears, you are then presented with a 30-page rendition of the earliest history of Earth known to modern theorists. It raises the very interesting point that there has been plenty of time for many waves of life to have evolved on this ball of rock, but all traces of which would have long since been swept down into the Dante'esque depths of the molten mantle by contintal drift and subduction, where it is put through the most efficient recycling system on earth, never to be seen or analysed by us hairless primates.

I personally found this to be a really mind-blowing revelation. Sure, it's hinted at in such TV shows as the "Stargate" series, and in some rather dated Sci-Fi stories such as 'Molt Brother' by Jacqueline Lichtenberg, but never have I seen it presented in such a serious and detailed manner.

After "Earth's pre-human history 101" comes the exploration of some of the other potential life-zones within our local space, such as Mars, which has 21 pages dedicated to just itself, and then a further 14 pages on the rest of the solar system. Considering some of the life-forms posited by authors such as Iain M. Banks in his book The Algebraist, or David Brin's astounding 'Sundiver' from his 'Uplift War' saga... I was hoping for some serious scientific opinions. Not a 14-page flick-thru.

Then we take a step further out, exploring possible life-bearing worlds orbitting other stars, and methods by which we could possibly detect them from back here on ol' Terra Firma. This in itself was quite an intriguing 24 pages, but again, I was hoping for more depth in these areas. Kind of glad Lewis didn't go there thou, as my brain was seriously starting to ache from the overload by the end of the book, when he makes his Synthesis and Conclusion. That's the side effect of trying to cram all this serious-sci into one lump of cognitive grey matter in only 2 days. -whew-

Overall, though I had some trouble getting into this book at the start, and some disappointments throughout, I still felt it was an excellent read, well worth slapping into the reference library for when you need some in-depth stuff for a school paper, doctorate work, or something to blow the brains at the office parties.

But seriously, this is NOT for younger readers, unless they make Dougie Hauser look like an escapee from The Beverley Hillbillies. It's full-on, but still accessible for the Average Joe, as long as he is ready to take it slow and cross-reference anything that's a bit too heavy. Even though I am quite comfortable with this level of scientific literature, I found it very helpful to Google the occassional point or two, just to make sure I had a solid handle on it before I moved on.