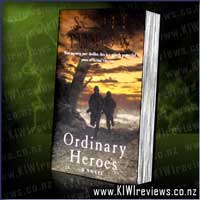 "All parents keep secrets from their children. My father, it seemed, kept more than most..."

Whilst mourning the death of his father, courtroom journalist Stewart Dublin decides to research the life of a man he always respected, always admired, but possibly never quite knew...

As a young, idealistic lawyer during the last terrible months of the Second World War, David Dublin is sent to the European Front - ostensibly to bring charges against American hero, Robert Martin, who has inexplicably gone local and stopped following orders. Martin has become a liability and the authorities want him neutralized.

But as Dublin learns more about Martin and the demons possessing him, he finds himself captivated by Martin's enigmatic ex-mistress - a women of incredible courage and dangerous anger. And someone who will do anything to protect her comrade-in-arms...

Stewart discovers his father's journal - and reads first hand of the shattering moral consequences for those caught in the chaos of war and, finally, the secret he died protecting...

Acting - and How to Survive It

I enjoyed this book but some parts were a bit confusing, the book is divided into chapters and each chapter is told from a different person so you could be in the present and Stewart is telling of his feelings about what he has learnt about his father and his time in the war and the next you would be reading the diary that David wrote, the confusing parts were when David would describe military terms and that could be a little boring.

The characters were well written, I don't really have a favourite as they all had good and bad parts. I had already guessed the great secret about halfway through the book but it was never actually confirmed. This was a war story gold well as well as a romance, there was danger and deceit but it was clear to see how the story would turn out. The violence described is to be expected but the real gory details weren't included, there was death and distrust ion and a few were incredibly sad. I think the biggest loss is the innocence of the soldiers, glad that is something I never have to experience.

I have never read any of Scott Turow's books before but I will be keeping an eye out for his other books as I enjoyed his style of writing.

A strange telegram lures fourteen-year-old Amy and her younger brother Dan deep into Russia and away from the only trustworthy adult they know.

Signed with the initials NRR, the telegram launches a race to uncover a treasure stolen by the Nazis, and the truth behind the murder of the last Russian royal family.

All too soon, the treasure hunt starts to smell like a Lucian trap, but the the bait might just be irresistable... ... more...