The Tuatara and the Skink review 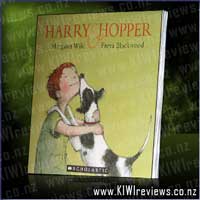 Disclosure StatementFULL DISCLOSURE: A number of units of this product have, at some time, been supplied to KIWIreviews by the company for the purposes of unbiased, independent reviews. No fee was accepted by KIWIreviews or the reviewers themselves - these are genuine, unpaid consumer reviews.
Available:
at all quality reatilers.

Harry and his dog Hopper have done everything together, ever since Hopper was a jumpy little puppy. But one day the unthinkable happens. When Harry comes home from school, Hopper isn't there to greet him. Hopper will never be there again, but Harry is not ready to let him go.

This story tenderly demonstrates the shock of grief and the sustaining power of love.

Doctor Who: Heroes and Monsters Collection

This is a very sweet and gentle, yet sad story about an issue that many children have to deal with at some stage during their childhood... the loss of a beloved pet. Although maybe a little higher than I'd normally pay for a kid's book, Harry & Hopper is definitely worth the few extra dollars as it is one of the better books for younger children about dealing with grief, and not quite as blunt about it as some of the ones I've come across. Even though Freya Blackwood's illustrations weren't the usual nice and tidy type of drawings you usually find decorating the pages of a children's book, they were still rather touching, and gave plenty of emotion to the story.

Overall... definitely a good book worth putting on any child's bookshelf.

I was a little hesitant with this book, as I was unsure how a children's book could try and explain the feeling of grief and loss of the death of an important figure whether it be an animal or person. This book concentrates on the loss of Harry's pet dog Hopper.

Harry got Hopper as a puppy, and from that moment on they did everything together. However one day when Harry comes home from school, his faithful friend isn't at the gate to greet him. Harry's Dad gently explains to him that Hopper has died. This information doesn't sink in quickly for Harry, as he turns the tv on as a distraction. He also refuses to take the day off school. Whilst at school he remains in what I would call denial, as he doesn't talk to his friends about it.
That night he is allowed to sleep on the sofa in the lounge as Hopper normally slept on his bed with him, and he felt sad that Hopper was no longer there. As he falls asleep he begins to dream about Hopper. He dreamt that Hopper was still alive and they ran around the backyard throwing sticks and balls. It was only after a couple of nights that Harry was ready to let go and began to deal with the grief of losing Hopper.

I thought the book was really well written. It is easy for children to understand, however it's not a book that I would read too frequently as it may start my daughter talking more and more about death not that that's a bad thing, but that is a subject that I would rather leave until it needs to be discussed.

The illustrations are done well. They are very appealing to young eyes as my daughter kept pointing out all the different pictures on the page.

All in all I think this is a very well made book, and it's presented in a great child friendly manor. Not scary at all, considering the thought of explaining death to a child can be horrifying in itself!

Score: 4.0
Product reviews for listing 8070: The House With a Clock in Its Walls -  Written by John Bellairs

Lewis Barnavelt doesn't have time on his side...When Lewis Barnavelt, an orphan, comes to stay with his uncle Jonathan, he expects to meet an ordinary person. But he is wrong. Uncle Jonathan and his next-door neighbour, Mrs Zimmermann, are both witches! Lewis couldn't be happier. What's not to like about seeing his uncle practise spells and eating Mrs Zimmermann's famous cookies?
At first, watching magic is enough. Then ... more...