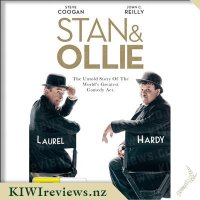 Disclosure StatementFULL DISCLOSURE: A number of units of this product have, at some time, been supplied to KIWIreviews by the company for the purposes of unbiased, independent reviews. No fee was accepted by KIWIreviews or the reviewers themselves - these are genuine, unpaid consumer reviews.
Available:
June 2019

I went to see this at the cinema as my husband is a big fan of Laurel and Hardy. I, on the other hand, was new to most of the material. I knew a few key facts but then it got a bit vague other than they were popular. For this reason, I enjoyed the "backstory" I am not a massive fan of physical comedy (the easy laugh in my opinion) so the recreation of key comedic moments was never going to hold me (unlike a good rock biopic). So I cannot comment on "how well the performers did" to recreate the feel of the original comedy.

This story, however, did not focus on the "why they were popular" but more what was happening behind the scenes in their "real lives" which I found engagingly tragic. The difference between the two was clear and challenging to perform alongside a long term closeness that being in business together gave them. I was very impressed by the rivetting performances by the two main actors as they really carried the key moments and emotion. I liked that it was not played for tears or laughter but more for exploring a long term relationship and the key characters and things that influenced them.

The time periods were well shown and were not the focus of the film but it was beautifully shown and a number of scenes were truly beautiful in their details. I don't know that I would sit through the whole thing at the movies again but I would definitely rewatch on tv with a device in my hand. The soundtrack definitely stood up to the performances and did not dominate which was great. For a movie that I was only going along to keep someone else company, I got a great deal more out of it than expected.

I am not old enough to remember Laurel and Hardy in their heyday, but one of our local cinemas used to show reruns of old movies which meant I did get to see a lot of them. Many were very short and were screened before interval, so often I did not know I was going to see one of their movies since only the main feature would have been advertised! Some of the earlier films were silent which made them even more enjoyable - when the genre was comedy, you did not really need dialogue to know what was going on!

However, when first watching this video, which features Steve Coogan as Stan Laurel and John C. Reilly as Oliver Hardy, I recognised immediately some of the comic sequences that I had seen years ago but with the "real" Laurel and Hardy. And, just as in the days of the silent movie, there was no need for words - or even sound effects. Some of them were replayed multiple times as the plot followed the pair from one venue to another, but there were small differences in each performance which reflected what would have happened in real life as sequences were adjusted and refined. The two-door station sequence, which features the two actors continually missing each other as they go in and out of opposite doors, is a familiar comedic routine which never loses its appeal; of course, the audience know that eventually the two are going to meet up - often amid great hilarity and falling about the stage!

Although the film sets out to document the last tour that the duo undertook in order to generate publicity for a new film, it also examines the dynamics between them and their respective wives. The backstory is supplied via verbal references so that a viewer who is unfamiliar with prior events soon learns that both have had bad luck in finding love and are settled at last with their current partners, and that although the two men are close friends, they have had several fallings-out over the course of their careers. Everything else is self-explanatory, focusing largely on the challenges of travelling and setting up in each new performance venue, and on their personal health - especially Ollie's. The two actors are convincing in their roles - so much so that when the end credits came on with a slideshow of photographs and clips, I was amazed to realise that these were the real Laurel and Hardy! The one giveaway was Oliver's wife Lucille, who in real life was taller than her film counterpart (Shirley Henderson).

I liked the way that the lighting toggled between full colour, muted colour, through to sepia, and then to monochrome. The intensity of the lighting depended on where the action was placed - whether outdoors, indoors, in a smoke-filled theatre auditorium, or on stage in a reprise of an original dance sequence. At times the lighting morphed between black-and-white and colour where the intention was to show a time transition or a "newsreel" item as when Lucille and Stan's wife Ida (Nina Arianda) arrive to join their husbands at the Savoy. These "newsreel" sequences were taken from the originals (with a little poetic licence, of course).

On first viewing, I found the film quite slow moving, but on watching it a second time I picked up references and events which I had missed the first time round. I did enjoy it much more the second time, so would recommend that it is well worth seeing twice. It may be because many of the background events and historical references were new to me, but I would imagine that most people these days would be unfamiliar with some of the material. The one thing that is timeless is the slapstick humour and hilarious interchanges between the two actors. That can be enjoyed on any level.

In my opinion, the true stars of the movie are the prosthetics team. John C. Reilly is not a small man, but he is nowhere near as big as Oliver Hardy. Hardy was not only obese, he also had a large double chin which all but concealed his neck. Reilly had to be fitted with full body prosthetics; these were custom made to fit exactly and had to be replaced each time he wore them. The wonder of this technology is that, if perfectly constructed, it is impossible to tell that the actor is wearing them. One of the extras included on the DVD is a short documentary on the fitting of these prosthetics; I found this utterly fascinating. Steve Coogan wore prosthetic ears because his own did not stick out enough, but this was a minor enhancement compared to Reilly's.

Having watched the film twice over, you would think that I promptly moved on to something else. You can only take so much wisecracking and slapstick before wanting a change of pace. All the same, I realised I was still in film mode when I caught myself humming "Trail of the Lonesome Pine" as I was putting the DVD back into its case!

Starting a new year of high school, Lola (cyrus), or "Lol" as her friends call her, works to find the right balance between family, school, friends and romance. Broken-hearted by her ex, Lol's world is soon turned upside down when she is surprised to find her best friend, Kyle (Douglas Booth), a musician in an up and coming rock band, could possibly be the love of her life.

In her quest towards independence, self-identity and ... more...