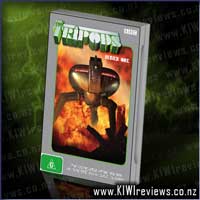 Based on the novels by Samuel Yourd (under the pen name 'John Christopher'), The Tripods is a science-fiction series with a difference in that the world depicted is light years away from the gleaming plastic spaceships and colourful backdrops of Doctor Who or Star Trek.

The only visible technology is the Tripods themselves-gigantic three-legged machines, the rulers of a simple-minded community who, by a process known as 'capping', render the population into a life of benign slavery and servitude, eliminating natural human curiosity and creativity. However, not everyone is prepared to accept being brainwashed. For 14-year-old Will, a life such as this is a fate worse than death and so he and his friends leave their families to find a free world, and to destroy the Tripods.

Over 13 action-packed episodes, the timeless story shifts between a straightforward adventure series, with our three heroes repeatedly outwitting and escaping the clutches of both the Tripods and their human agents, to drawing parallels with organized religion, mind-control and a general plea for individuality and rebellion. In its day The Tripods was one of the most expensive productions ever undertaken by the BBC, with a huge cast and many new special effects.

Wow... I can actually remember this series from when it was on TV, and I own all of the Tripod-related books written by Mr Yourd (I am SO not surprised he used a pen name!)... this series had me utterly spell-bound and is one of the primary reasons I always try to see any TV series or movie based on a good book(s).

In the far future, humanity has been invaded by a life-form we could hardly imagine. At puberty, when the hormones start to flow and thoughts turn to aggression and rebellion and the passions rise, the Tripods come to cap you. Your head is shaved, you are taken up into the Tripod, and when you return some time later, you have the Cap... a golden metallic mesh that sits flush with your skull, bonded to your skin and in some strange way connected to your brain. From that moment on, you don't question the Tripods' right to dominate and rule humanity, you lose all free thought, and you become a meat-puppet. Bland, quiet, unadventurous, unquestioning... numb from the neck up.

Before you are capped, you are still free to think what you want, do what you want (within the laws of the society you live in, and those set down by the Tripods) and can still wonder at why the Tripods rule humanity. Such is the status of young Will. A curious lad, prone to introspective thought and questioning, keen for adventure and unwilling to lose it all when the Cap is placed on his head at his next birthday less than a year in his future. Then he meets Ozymandius...

Ozy is a Tramp, a defective... an adult for whom the Capping failed. Living in a separate enclave outside of town, the tramps are treated with pity and fear, for their brains would not accept the Cap, and in the process got broken. But Ozy isn't what he first appears... Ozy is a travelling recruiter for a hidden group of human rebels, and he sees a lot of promise in young Will... he sees the gleam of a sharp mind and a determination not to give up his individuality and freedom. And thus begins Will's journey from his home in the English backwaters to The White Mountains in Europe, secret home of the resistance movement. From there, things start to get really dangerous.

Series 2 was never made, unfortunately, which is a total shame in my book, because this story was stunning, and the end of Series 1 left a lot to explore. The books, of course, continue onwards and the adventures are even more stunning, so maybe one day someone will ressurrect this... but then they said that about Firefly and that never happened, so...

Overall, I thought this was brilliant, and any sci-fi fan will be impressed at the special effects, which were cutting-edge for the era. In most places things looked awfully real, even the Tripods themselves were structurally workable, so long as they had some AMAZING gyros to hold them up on 2 legs while the third one shifted. I could happily watch this series over and over again... when it's in storyline-mode it's very thought provoking, and when it's in adventure-mode it's quite enthralling. Something for everyone, and made back when graphic violence wasn't required to keep the audience happy, so it's even kiddy-safe... but some young'uns might find it a bit disturbing, so personally I would rate it PGR for under-10's.

After enduring unspeakable torture, Dean escapes from Hell, rescued by an all-powerful creature he's never seen before - an Angel - a warrior of God who recruits Sam and Dean into Heaven's battle against Hell. And there are whispers that a certain fallen angel will soon be freed from his prison deep in Hell: Lucifer. If Sam and Dean can't stop it - if Lucifer walks free - he'll bring on the Apocalypse.