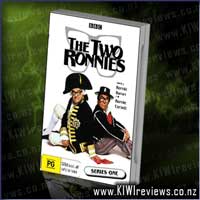 One is a little round; the other is a little, well, little. They both wear glasses and answer to the same name. They read mock news items, and engage in parody, puns and tongue-twisters. The little one tells tall stories from a big armchair. They perform absurd sketches, they sing, they dance and sometimes they even dress up in dresses.

They are Ronnie Corbett and Ronnie Barker, the comedy duo who had a devoted following of millions around the world from 1971 to 1987. In a glorious blend of visual and verbal humour, a typical programme begins and ends with the pair seated behind a desk reading quick-fire 'news' reports. In between, "in a packed programme tonight", there are sketches, 'drama serials', musical routines and a rambling monologue from Ronnie Corbett, before finally signing off with their famous catchphrase, "It's goodnight from me', 'And it's goodnight from him."

All eight episodes from Series One are featured on this DVD, and among the many highlights are the 'Bald Man at a Party' sketch and the period drama mini-series ?Hampton Wick?. The Two Ronnies is as much a British institution as roast beef and Yorkshire pudding.

I can recall waking up late at night to the sounds of my mother howling with laughter, walking into the lounge and seeing my father, a normally tacturn man, grinning like a maniac with lockjaw, while they watched The Two Ronnies. At that tender age, I didn't really get the humour, but as I grew and experienced other British humour such as Monty Python, Open All Hours (also starring Ronnie Barker) and Blackadder, I found I understood the humour, and could appreciate it more.

Like Alas Smith and Jones, and Not The Nine O'clock News, this show is a series of staged skits, not a sitcom or series per se... this needs to be made clear really, otherwise someone might expect a more flowing, jointed show. The closest modern equivalent that I can think of would be -shudder- MadTV, which is horrible really, as the Americans just can't do "thinking man's humour"... only the Brits have that dry, intellectual wit that really makes one see the subtle layers of humour as well as the 'slap your face with a haddock' kind as well.

Overall, if you can appreciate the humour of shows such as Absolute Power or Hancock's Half Hour, then you are going to be well advised to visit the small room before watching this, because a soggy couch isn't anywhere near as funny as this is.

Four international pro comedians will be hitting the road bringing some of the globes' finest, and most hilarious comedy to Hamilton, Tauranga, Rotorua, New Plymouth, Wellington and Napier this April and May. Fresh from the 2017 NZ ... more...