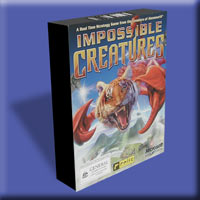 The year is 1937 and you are Rex Chance, renowned world adventurer and war correspondent. You have spent your life exploring the wilds of Africa, the ice shelves of Antartica, and the sultry jungles of the Amazon. You've seen every beast on earth... or so you thought.

You've just received word from your long lost father, scientist Dr. Eric Chanikov, who disappeared amny years before. Suddenly now he begs to see you. So you fly to the Isla Variatas in the South Pacific where he works in the emply of wealthy industrialist Upton Julias. But what begins as an innocent reunion quickly turns sour as you come face-to-face with the Sigma Technology.

What is the Sigma Technology? Imagine possessing the ability to combien any two animals into a single creature. Flying elephants, giant ants, amphibious sharks... anything you can conceive. The possibilities boggle the mind! What benefits might it bring? What evil might be wrought?

Another fine gem of a PC game, under the banner of Microsoft Game Studios.

With a somewhat lower than great graphics engine running it, it was a little bit of a let-down actually. Though I dare say that on a high-end graphics card it would run a lot smoother, but even on my Riva TNT2 64mb card with full-tweak on, it was jerky to the point of being almost like a downloaded DivX movie, the frame rate was appalling!

However, to off-set that, the game plot was fun, there is a high immersion factor due to lots of fine details to pay attention to (like getting DNA samples off some of the smaller, faster-moving creatures) and some real strategy to get through some of the higher levels, where your opponent starts off with forces vastly superior to your own.

It would have been nice to have the ability to sample the DNA from some of the attacking creatures, since they often have abilities you are unable to defend against or defeat, but if all else fails, combine yourself up some long-range artillary critters (combination of Porcupine and Timber Wolf is a cool one) and blast them away with sheer numbers.

Not a game I would play for days on end, but still well worth having a serious look at if you enjoy blast-em-up and strategy combo games.

Score: 7.7
Product reviews for listing 861: Shout It Out!
Developed by Fun and Games