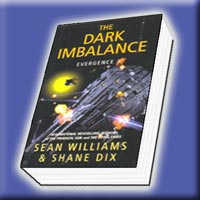 In the Sol System, Earth is no more. But aboard the various starships and space stations orbiting the still-burning sun live the remnants of mankind - unaware of the danger they're in from an army of genetically enhanced warriors determined to destroy all humanity...

Renegade intelligence agent Morgan Roche has been charged by the High Humans to protect mankind from the threat of the cloned warriors. Pursuing one such warrior into the Sol System, she strives to learn the true identity of the enemy - and how to defeat them.

It is here, in the light of the star called Sol, that Morgan will learn the truth - about the artificial intelligence known as The Box, about the man who calls himself Adoni Cane, about the High Humans...

And about her destiny.

The third and final book in the EVERGENCE TRILOGY, The Dark Imbalance gathers all of the seemingly lose threads and shows the reader the 'big picture' at last. Suspensful and thrilling, this story has a very high 'got lost in it' rating due in great part to the storyline carrying flavour from many other popular and classic authors.

Without giving the plot away, the story so far has the three main characters, Morgan Roche, The Box and Adoni Cane tracking another enemy warrior to the old star system known as Sol, the ancient home of the human race. Lost in myths and time, the true origins of humanity are clouded, and the Sol System is but one of many possible candidates that could claim to be the one true home of our kind. With humanity having spread out amongst the stars, and having evolved into numerous castes of varying abilities, the Sol System has long ago lost any place of importance to Humanity as a whole.

Here, Morgan will finally learn a number of secrets that will reveal not only the answers she is seeking, but also answers to questions she didn't know needed to be asked, including why she has no history, who she really is, and why she was chosen for this mission in the first place. She will learn all the secrets of The Box and the enigmatic Crescend, the High Human who created it.

If there is a book out there that I would consider a very satisifying read, this is it. Having read other books by these two authors [See our review on 'STAR WARS - The New Jedi Order : Force Heretic : 1 : Remnant'] I am impressed by the talent coming out of the Australasia/Oceania area. Williams and Dix are amongst a new breed, with company that includes New Zealand's very own Dale Elvy [See our reviews on Dale's SPIRIT SHINTO trilogy].

50 Fun and easy reproducible activities that help every child master the top 100 high-frequency words. Included are activities like a mini book, word games and a Bingo game.