ProdID: 1019 - A Short History of Progress
Written by Ronald Wright 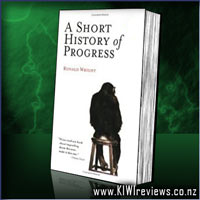 The twentieth century was a time of runaway growth in human population, consumption and technology, all of which placed tremendous demands on earth, air and water - the very elements of life. The urgent question of the twenty first century is how, or whether this can continue.

In a Short History of Progress, a runaway best seller in his native Canada, Ronald Wright explains how our current predicament is as old as civilisation.
He brilliantly argues that only by understanding the patterns of progress and folly that humanity has repeated everywhere from ancient Rome to Easter Island can we learn to change our ways, and with luck and wisdom, avoid a disastrous outcome.

If there is one book I would give the world's leaders to read, this would be it, and if I could convince you to make this the next book you read, then this review has been worth writing.

Wright is a highly regarded historian, and in this book he not only tells us what has happened in the past, he tells us what is very likely going to happen in our future, and it's not something to look forward to. Starting with the ancient civilisation of the Messopotamians (what is currently Iraq) he describes the ascent and then the decline of each civilisation. SInce then we have seen the rise, and then the fall of Greek civilisations, the Roman Empire, the Incas, the Babylonians and more. Each civilisation rose to a point where it experienced hitherto unimaginable power, and then collapsed. The chilling message is that each and every civilisation collapsed for the same reason - over exploitation of available resources.

The message he gives is shown in stark clarity in the story of Easter Island. Around 1000 years ago when the Polynesian explorers discovered Easter Island, it was a rich, lush tropical paradise, with mighty trees, dense forest, abundant birdlife and fresh water. Then came the stone statues, which soon became a cult. At one point there was a stone statue for every 10 islanders, and to move them from place to place the islanders felled trees as rollers. In a matter of years they felled the last tree, and the island's topsoil was eroded, the vegetation died and the birds became extinct. The islanders, and at one stage there were 10,000 of them, were no longer able to build canoes to fish with, and the island no longer had any food. When the Dutch explorers found them there were less than 1000 living in caves and using canoes made of driftwood to eke an existence from fishing.

In the final chapter Wright paints a chilling picture of how our planet is today's Easter Island. "Ecological markers suggest that in the early 1960s, humans were using about 70% of nature's yearly output; by the early 1980s we'd reached 100% and in 1999 we were at 125%". The message is clear, if we don't change what we are doing it won't be long before the world we live in is profoundly different, and the difference is not one we want to experience.

But its not too late, we haven't felled the last tree on our island. Yet.

In a few simple lines of verse on each spread, fathers and mothers are ready to put their youngsters to bed. But in this book, the youngsters are a wide variety of dinosaurs. And how do dinosaurs say good night?

Filled with wonderful detail and humor, children and their parents will love the expressions and antics of the eleven different dinosaur children depicted here, and each species is spelled out somewhere in the young ... more...