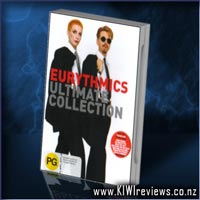 Disclosure StatementFULL DISCLOSURE: A number of units of this product have, at some time, been supplied to KIWIreviews by SonyBMG or their agents for the purposes of unbiased, independent reviews. No fee was accepted by KIWIreviews or the reviewers themselves - these are genuine, unpaid consumer reviews.
Available:
January 2006

OK now to try and explain why the score should be higher than it is. This dvd has no bonus features at all so it couldnt score there. But that doesnt stop the rest of the dvd from being brilliant for any 80's music fan.
With all the classics from the era, taken from 8 of their albums, I found it really easy to relax and sing along with them. I was surprised at how well I remembered them even though I havent heard them in well over a decade.
This dvd is full of their music videos rather than live performances so you have to expect some overacting, especially from the main man Dave Stewart. In his younger days he was a bit of a ponce and it really shows, especially in track 5, 'Right by your side'. It really is comical.
If you ignore the low score for bonus extras, this album rates an easy 8/10. It would have scored better, but track 1, 'I've got a life' is the one song I really did not like. Ironically, it's one of their newest. It's true what they say, "They dont make 'em like they used to" so grab this dvd while you can, because evertually you won't hear music like this anymore.

Franz Ignaz Beck, the greatest of Stamitz's pupils, led a colourful and eventful life. Fleeing Mannheim after fighting a duel with a jealous rival, he moved to Venice. After eloping with his patron's daughter, he finally ended up in France where he lived for nearly fifty years.

Beck's symphonies have long been admired for their inventiveness, startling use of bold harmonies and dramatic intensity. The most striking work in this set is ... more...