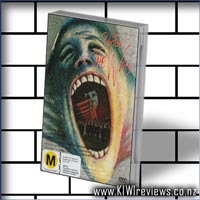 Disclosure StatementFULL DISCLOSURE: A number of units of this product have, at some time, been supplied to KIWIreviews by SonyBMG or their agents for the purposes of unbiased, independent reviews. No fee was accepted by KIWIreviews or the reviewers themselves - these are genuine, unpaid consumer reviews.
Available:
December 2004

THE WALL tells the story of a man named Pink Floyd who, as a child, lost his father in World War II. Being raised by an overprotective mother, Pink leads a dreary life, finally turning to drugs. As a result of the drugs and his gloomy memories, Pink spirals into a void of insanity.

Many years ago I went to visit a mate in his new flat. He was there, and so were quite a few others. There also happened to be a party going on, so I grabbed a bevvie and joined in. After about 6 hours I realised I was quite drunk, possibly stoned from the smoke in the room, and quite quite out of my tree.

An hour later, and I was right fuzzed, despite the lack of anything to drink except water for that time. So when it got quiet and the host put The Wall tape on to play, we were all keen to park our butts and enjoy. Then we reached the scene near the end when 'Pink' shaves his chest. When I saw blood dribbling out of his chest where his right nipple used to be, I got sympathy pains to end all sympathy pains. I woke up about 2 hours later and was not a happy lad.

Now, 8 years down the track and I get a chance to see it again, but now on DVD. No booze, no party, no smoky air... and no freaking when Bob Geldof shaved off his nipple. Yay! So at last I was able to beat my mental demons and watch the whole movie without getting the creeps.

The artwork and imagery in this cinematic classic has to be seen to be believed. Keeping in mind it is converted from a film medium, the quality is still impressive. The story is just as compelling today as it was back in 1982 when it was first made. I found the comparisons to Nazi Germany, especially the pseudo-Hitler Youth, to be just as disturbing as when I first became aware of this movie. The levels of social commentary in this movie are astounding. Everything from the results of over-protective parenting to the downfalls of an addictive lifestyle of excess.

Overall, if you like Pink Floyd music, and you want something 'a little different' to put on the box, this should be at the top of your list.