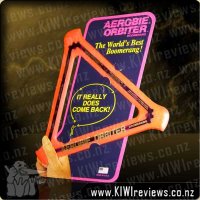 Disclosure StatementFULL DISCLOSURE: A number of units of this product have, at some time, been supplied to KIWIreviews by TeamSports or their agents for the purposes of unbiased, independent reviews. No fee was accepted by KIWIreviews or the reviewers themselves - these are genuine, unpaid consumer reviews.
Available:
at selected quality sporting goods retailers

This high performance boomerang flies out about 90 feet - and then really comes back!

Soft rubber edges for comfortable throws & catches, and available in a range of bright colours that are easier to see, and with a triangle shape that's easier to catch.

Patented design for unsurpassed performance, and made in the U.S.A.

We are huge fans of the Aerobie products and the Boomerang did not disappoint. Probably the most challenging of the products I have tried so far, and it does take a while to get the "throw" right. This is definitely best for a big open space for the times when you don't get the "throw" where you want it! I need to head down to the park minus the kids and get some practice in!

The Boomerang is soft to catch (if you can!!) which I like and also not so painful when you miss the catch and it gets you in the head....

I prefer the other products we have tried ie squidgie and flying ring, but only because we had a lot of fun running around after them whereas with the Boomerang if you get the technique right you don't have to move much. It was also way beyond my young childrens' abilities to use this whereas with the other products we all had fun as a family with them.

The Boomerang is probably great for a group of teenagers or adults so we will still be taking it to the beach this summer!!

Well we headed out into a nice big open field to give this a go. I'm not exactly known for my skills with a boomerang so it was going to be interesting to see how I went with this.

It is very comfortable to hold and you can quickly get the hang of throwing it so that it does come back to you, the difficulty I had was that it didn't just come back, it continued on back past me and did a few more spirals before hitting the ground.

This thing really can get both a lot of air and a lot of distance (thank you kind neighbouring house for helping us retrieve it off your roof *blush*) so I would allow even more room than suggested, a couple of football fields ought to do it.

Between this and the Squidgie Disc which we also got to try, this possibly wouldn't be my first choice if headed to the park with our young kids. I would more likely keep it for the adults throwing something around at the beach for example.

Overall though, it was a lot of fun to play with, easy to use though not so easy to control, that would take a lot more practise. And perhaps a bigger field. Whoops.

Well, this thing was definitely a cool toy. The design was excellent; it looked much better than the "V" shaped boomerangs. The grip was comfortable; it was reasonably soft and it also made any impacts less painful. I found it a little difficult to throw the boomerang, I either launched it at to much of a flat angle, so it just went up, then came back down and nearly hit me in the stomach; or I threw it almost vertical, so it just hit the ground. Controlling this thing will take a lot of practice; so if you find it hard to use on your first few tries, don't get upset.

The performance was awesome, the thing didn't even touch the ground, and it almost looked like it was controlling itself! I loved the way that the constantly rotating triangle shape of the boomerang gave it a star shape, so as it travelled, it looked like a shooting star! It is a bit unfortunate that the orbiter needs a lot of space, because this would be a great toy for parents to use with their kids, they can throw the boomerang, send the kids after it, and then they'll become exhausted by the time they realize that the boomerang has already come back, so they don't even need to take one step!

I think that this thing is good for all ages, it is a good way to exercise the arm, shoulder and wrist muscles, and it is also extremely fun. Enjoy!

A toy that comes back is a lot of fun, but doesn't do much for the "calorie burning" requirement of fun in the sun. This doesn't seem to bother the kids very much at all, so who am I to complain really.

Taking the kids out to the park meant giving this a good test, since the favourite park is actually a scenic reserve with plenty of huge open spaces, you know, just in case this turned out to be somewhat less than homing.

It took a few goes to get it right. Actually it took close to 20 throws until I figured out I was aiming it across the wind instead of into it. There is nothing quite as embarrassing as having your 7 year old niece tell you "You should be throwing it that way, because the wind is blowing from over here" after you have made a big show of reading the instructions. After I turned around, the performance was greatly improved.

After half an hour of ducking frantically to avoid playing like "Mutt" and trying to catch it mid-air with my teeth, I cottoned on to the flight patterns and managed to catch it in my hand without having to take a step, or leap of faith. This really impressed the younger ones who all wanted to try it. Those who managed to give it enough power in the throw soon showed me that I am an old dog, and though I can be taught new tricks, I am far from a quick learner when compared to a bunch of under-teens with more energy in their toes than I have in my body.

In summary, this is one seriously fun toy that will keep the kids entertained for ages. Heed the warning though, it really does NOT float at all. A bad shot landed it in the nearby pool. Thankfully, the family who lived there were very kind and sent one of their kids in to recover it, saving us from a soaking. They joined us for some "testing" as well and have since decided to go out and buy one of these for themselves, and a couple more for Christmas gifts. A productive testing day, I feel.

We didn't want to make it bounce so high, it would knock the real moon out of the universe. The Moon's crazy, gravity-defying features will turn a routine game into an out of this world free-for-all ... more...