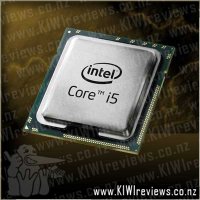 Disclosure StatementFULL DISCLOSURE: A number of units of this product have, at some time, been supplied to KIWIreviews by Intel or their agents for the purposes of unbiased, independent reviews. No fee was accepted by KIWIreviews or the reviewers themselves - these are genuine, unpaid consumer reviews.
Available:
September 2009

Get a major boost in PC throughput with the intelligent performance of the Intel Core i5 processor, which automatically allocates processing power where it's needed most. You'll move faster when creating HD video, composing digital music, editing photos, and playing the coolest PC games. With the new Intel Core i5 processor, you can multitask with ease and be more productive than ever.

Intel Turbo Boost Technology
Dynamically increases the processor's frequency as needed by taking advantage of thermal and power headroom when operating below specified limits. Get more performance automatically, when you need it the most.

8 MB Intel Smart Cache
This large last-level cache enables dynamic and efficient allocation of shared cache to all four cores to match the needs of various applications for ultra-efficient data storage and manipulation.

Intel HD Boost
Includes the full SSE4 instruction set, significantly improving a broad range of multimedia and compute-intensive applications. The 128-bit SSE instructions are issued at a throughput rate of one per clock cycle, allowing a new level of processing efficiency with SSE4-optimized applications.

Considering that processors can be fickle things to review - the performance they give depends so much on the hardware around them - it can be tough to give anything close to an absolute statement... so for the sake of this review, we're going to say now that the system we built would be considered 'entry level' for someone wanting to use a CPU like this. Built on an Intel DP55KG motherboard, the CPU is supported by 4gb of Kingston HyperX DDR3 1600 RAM, a LeadTek WinFast PX9800GT video card with 512mb onboard RAM, and an Intel 40gb SSD holding a bare install of Windows 7 64bit.

The short version: For a significantly lower price, you get fairly similar results to a low-end i7 chip... considering you have half the number of processing threads, that's pretty darned good! The big key is the i5's "Turbo Mode" - which in many cases can make up for the lack of HyperThreading. But what is Turbo Mode? When one (or more) of the four cores is under high pressure, the CPU will self-overclock from 2.66GHz up to 3.20GHz, giving you a performance surge for a 'short-run' task. Smart technology that can help this little beastie hold it's own in short sprints against higher-spec processors.

Positioned in the market as a high-profile eco-smart mainstream option, this CPU drew a fairly carbon-friendly 89 watts across the entire system during idle, and it surged to a still-impressive 181 watts during some moderately serious bit-crunching. Your results will vary - no two systems are ever really the same - but you can expect to get some feel-good vibes from the environment as you stalk zombies onscreen. Basically, going from 'idle' to 'full-on with Turbo' will just-over-double your power consumption.

When utilising applications not designed, or willing, to take full advantage of the multiple cores, you'll really see Turbo Mode taking charge and giving you increased grunt. Of course, for apps designed to really soak up the processor power at hand and use it well, this beastie will fairly fly. No Guarana required for this one! Running through a 400-step Photoshop Action on a Core2 Duo E8500 took around 68 seconds, but on the i5 it took a mere 29 seconds... significantly less than half the time! If you want to look at all the serious geek tests etc, you can search for them and you'll come across plenty... but we don't 'talk geek' here if we can help it... so here it is for 'the guy at home wanting to upgrade to something with grunt'... This chip will SERIOUSLY enhance your World of Warcraft game. Paired with a good video card, you'll have everything you need to play it big, play it fast, and play it pretty.

For those who do a bit of video work, you'll find that a grunty video card is a requirement, but if you have one then you'll find this processor is a very nice and affordable essential. Encoding video and audio streams will be blazingly fast... sure, not the fastest available, but certainly fast enough to make it feel almost effortless.

A word of warning... overclocking this little beast can give you some amazing numbers in benchmark tests, but the stress on the hardware will significantly reduce it's lifespan and push it well outside the 'eco-friendly' bracket. Enabling Turbo Mode will give you around a 12-15% performance boost on it's own... with a hefty overclock, you can push that up to around 30% but you'll put the CPU under considerable strain and it will show in a reduced lifespan and a greater chance of heat overload without a large-capacity active heatsink.

Overall, this chip really impressed me... it could handle a lot of punishment without getting jittery and freezing, and it has a strong feature in the Turbo Mode - and it's partner in power, the SpeedStep mode that allows it to UNDERclock the cores to reduce power consumption if there is minimal workload. Probably the only significant issues would be the need to buy a new motherboard that supports the LGA1156 socket, and of course the need to jump to DDR3 RAM. The latter is a mixed blessing... with support for the 1333MHz clock speed, you'll get some amazing performance, but for those who want to 'recycle' their DDR2 RAM, well, you're out of luck. For those looking to build a new system, or willing to upgrade extensively, this is certainly the chip you should be looking at first.

Road warriors: you needn't deny yourself the comforts of home when you're on the road!

Now you can enjoy great sound with a simple setup from your laptop! The Logitech V20 Notebook Speakers offer a convenient, high-quality speaker system for your laptop with rich, full sound and deep bass--all in a lightweight, portable ... more...