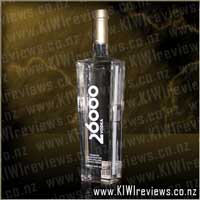 Disclosure StatementFULL DISCLOSURE: A number of units of this product have, at some time, been supplied to KIWIreviews by McCashin's Brewery or their agents for the purposes of unbiased, independent reviews. No fee was accepted by KIWIreviews or the reviewers themselves - these are genuine, unpaid consumer reviews.
Available:
at selected retailers

Try the Lychee-infused vodka for an exotic Asian delicacy of spices and sweetness.

a very unusual flavour and one i am still not entirely certain of. it has a certain character to it that lends itself to fruity cocktails and punches but i am not totally sure on drinking it straight. when mixed with orange juice it loses that distinctive lychee taste somewhat but if you mix it with something softer like pineapple or mango juice it comes through a bit better. not too sure if i will keep this one around as it seems a little more hype than bite but it could be worth having a bottle in the cabinet in case of guests who like to try something different now and then.

As a child I was given many opportunities to experience foreign foods. Most really didn't appeal to me, but a lot of the exotic fruits did, Lychees especially included. They carry such a strange flavour, I found myself drawn to them, especially when 'butchered' by adding the European 'contaminant' of ice-cream to them.

Since my vodka preferences are usually strongly in the "only if there's no bourbon on hand" camp, this one was a real mixed-feeling for me. There was the inevitable freezing/burning sensation caused by the high-alcohol vodka, but a definite, if subtle, flavour of the lychees that snuck through the burn and settled in the back of my nose and throat, giving a very pleasant aftertaste, while I spasmed around the room as I usually do after a shot of vodka.

Though I doubt I will ever become a drinker of 'neat vodka' I was more inclined towards this flavour than the Crystaline, simply because it was flavoured. However, this was a very willing companion when mixed 50/50 with the Raspberry Lemon vodka... the result still had a strong fruit base, but was somehow smoother than either alone. I found myself able to swish back a couple of these combos before I had to stop for fear of not being sober in time to taxi others home later that night.

Overall, though far from becoming a 'preferred' drink, this is certainly one I would be willing to imbibe if my leading intoxicant of choice was empty.

I really liked this flavour, even though I am not a fan of the fruit it's flavoured with.
The strong alcohol kick is really powerful on its own, and that means it still struggles through even the most determined effort to drown it in juice or other mixers.
I rather liked this one mixed with Lift+ though that took away all of the taste of the lychee. A real shame, but it was a nice way to sip away the evening while trying all the other yummies on hand.
All in all, a very appealing drink and one I would be more than happy to buy at the liquor store when I have the cash to spare.

This was not my favourite flavoured spirit. The Lychee flavour made this vodka almost unpleasant. Lychee is a distinct taste and, when mixed with vodka, in my opinion, does not work terribly well. The aftertaste lingers and had me wishing for another drink to replace the taste.

Bursting with blackcurrants and raspberries, Kopparberg Mixed Fruit Cider spoils you. Rich and indulgent with an effervescent energy, its best served cold over mountains of ice.