The Book of God and Physics review 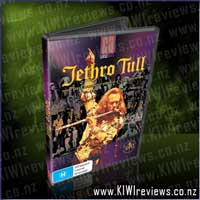 Disclosure StatementFULL DISCLOSURE: A number of units of this product have, at some time, been supplied to KIWIreviews by Roadshow (NZ) Ltd or their agents for the purposes of unbiased, independent reviews. No fee was accepted by KIWIreviews or the reviewers themselves - these are genuine, unpaid consumer reviews.
Available:
October 2009

From being one of the hottest blues-rock bands of the late-60s to touring with Led Zep to holding the record for the number of consecutive nights at the LA Forum to the first live concert broadcast worldwide to nearly bringing down the Grammys, the life and times of legendary, indefinable rock band Jethro Tull has rarely been dull.

Forty years, 2,000 gigs, 19 albums, 25 members, 20 million sales and a sex-change since a ramshackle group of spotty youths armed with nothing but a bunch of great tunes and a flute launched themselves onto an unsuspecting public at the Marquee in 1968, the key players in their long and illustrious history give, for the first time, their side of a complex and intriguing story.

Packed with rare archive and never before seen photos and footage, this is the fourth episode in the successful Classic Artists Series and the best yet. This is a portrait of how Ian Anderson became one of the most astute businessmen and hardest task-masters in rock. And then there's the music.

From the early blues of Mick Abrahams-era This Was to ripping up the Isle of Wight festival, through their controversial prog pastiches to the minstrel bringing early English folk to a 20th century audience, from the electronic 80s to the Best Hard Rock act of 1989 to an Ivor Novello Award, Classic Artists Series: Jethro Tull is an overdue chance to reassess one of the finest, controversial and most eclectic catalogues in British popular music.

The year was 1997 and I was discovering that there was a number of older bands I hadn't really given much time to, but should have. During my youth I was raised on a steady diet of 1950's classics, crooners, cabaret singers, and swingers styles... then I basically jumped right to mainstream radio as of the 1980's. Much good music was lost to me in those missing years, and many great bands. Jethro Tull was one of them. I didn't know their history, or their musical vision, or even most of their names... but I did know that their music was unlike anything I had heard before, and I liked it. Quirky, ecclectic, with strange tempos, a lead singer who looked like an escapee jester from a medieval court most of the time, and some of the most stunning lyrics.

So it was with great delight that I snapped at the opportunity to review this DVD... a candid behind-the-scenes look at the evolution of Jethro Tull, from it's early inception under a parade of names through to it's ultimate demise as it simply couldn't keep up with today's battleground of hip-hop, gangsta, and other genres of (c)Rap.

The early days were harsh for Jethro Tull, with the faces in the band shifting and changing fairly constantly even before they made it big. Only two members stayed with the band pretty much from start to finish, Ian Anderson and Martin Barre. From this core duo grew many incarnations of the band, but always with an attempt to retain the heart of their music.

Overall, this title is a documentary in no uncertain terms, but we are treated to insights previously unreleased, interactions and dynamics between band members from all eras, and quite a few clips of live performances. What did disappoint me though was the shortage of full songs... it would have been great to have seen more complete performances, be they live or 'music video' styled. Still, as a doco it served it's purpose and was both educational and entertaining... any more than that, and probably would have slipped out of the 'doco' category entirely.

Score: 8.8
Product reviews for listing 1427: The Boy With No Name -  Performed by Travis