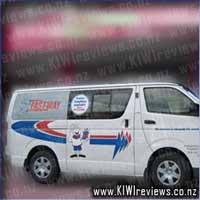 Fastway Couriers was conceived in April 1983 from an idea to operate cost effective hourly pickup and delivery services between Napier and Hastings (New Zealand).

In April 1984 an evaluation of company drivers showed that no new work was being generated by them. It was then decided that the time was right to introduce franchising, and franchise couriers were sought. A large number of franchises were established which resulted in far greater productivity. The franchise courier concept not only provided the incentive desired but also freed up working capital which enabled the company to develop further operations and linehaul networks. Never had franchising in the transport industry been attempted (worldwide) before.

The franchising system was then introduced to all branch operations. It was realised that the success of any operation depended on finding the right people to run the company. The people had to have local knowledge, outgoing personality, knowledge of the industry, the psychological desire to succeed and the ability to run the operation without constant supervision. The introduction of Regional Franchisees fulfilled this obligation and the company continued to grow rapidly.

In 1986 the company's founder, Mr Bill McGowan received the award of "NZ Entrepreneur of the Year". This award resulted in substantial national news media coverage and led to a rapid growth spurt of the company.

I would not recommend fastway couriers. Promised same day or next day delivery. 4 days later the package had not arrived and no attempt was made by fastway to contact either the sender or receiver.

Fastway said the package had been damaged and they offered to repack the items to which I agreed - however, once the package was eventually delivered all items has been looked through and some items were missing. There was even a birthday card to my son which has been ripped open.

Very poor service and an invasion of my privacy with no attempt from fastway to remedy the issues and no apology. Use this courier company at your own risk.

Had two parcels from different franchise areas apparently delivered in February, but although a signature had been paid for, for some reason the (Auckland) driver decided to leave without signature. Parcels were subsequently (presumably) stolen, and never located. Claims were made with the company that month, and we were advised that the resolution period would be no longer than six weeks. Three months later, still no payout from either of the Fastways franchises, despite repeated contact on our behalf, and despite the driver having to pay the company for the loss almost immediately after the claims were made.

Management level has in general been horrible to deal with, particularly in Christchurch. Claims officer Irene (Christchurch) has been snarky, rude and unprofessional. There is no sense of loyalty to customers, we have been made to feel like a massive hassle and mucked around and lied to no end, constantly being told that the resolution will be 'next week'.

The sender is in the process of securing a new courier company, and I now always ask for alternative postal arrangements when I know that a sender usually deals with Fastways. They are not worth the unfathomable hassle, horrible to deal with if there are any problems, we would strongly advise finding an alternative postal method.

I've been dealing with Fastway in Hamilton for a few years now and chose them due to their same day pick up and delivery for Hamilton/Auckland/Tauranga area as well as their affordable priced tickets.

I have had only excellent service from them. As I deal in sending artwork, it is high risk but to date I have had no problems or issues with damage to any of my parcels. Making sure myself that they are packaged up well and labelled accordingly goes a long way though I feel.

Because of the amount of time I have been dealing with this company I have seen many different drivers come and go and not one of them has been unpleasant or unprofessional to deal with.

Fastway have an easy to read chart and a simple process to order pick ups.

My only criticism is that they don't do weekend pick-ups or deliveries. A quick, friendly and affordable service that I highly recommend.

The worst customer service I have ever received - Kapiti Couriers

I have received my first bad feedback on Trade Me thanks to these guys keeping a parcel in transit for 14 days to date and not letting me know they hadn't bothered delivering it!

Can't get people to return calls - once I did get someone on the end of the phone she was obnoxious, rude and couldn't give a damn.

BIG THUMBS DOWN guys. If I had behaved this way in a previous customer service job I would have been fired

I have found that it all depends on the individual courier. There are some couriers that are absolutely useless and some that are wonderful. Our local courier is fantastic, very polite, friendly and always looks after us. Yes, we have had a couple parcel issues (damaged parcels) but this has always been handled well. There is a courier in Tauranga from Fastways that has won the NZ franchisee award two times. So goes to show it really does depend on the courier. Its a shame that one bad experience or courier can really spoil the company as a whole though. I still give Fastways the thumb up.

It is indeed a rare thing to find an operation that cares so little for it's customers as this regional franchise. I want to point out, of course, that this review is ONLY based on the service of the Manawatu franchise, and should not be taken as a statement about the brand as a whole.

Recently I was posted some FastWay tickets from a contact in Auckland, who wanted me to send some review goods up to him. Thinking this was nothing new (since we had done the same thing with CourierPost and NZ Couriers in the past) I packed his goods into a bag, slapped one of the tickets on, addressed it, rang the local FastWay franchise and booked the pickup and popped it out front for collection. Normally, couriers will pick up goods for national delivery in the afternoon, so as to get them to the depot in time for sorting and shipping on the evening long-hauls.

So you can imagine my surprise when I noticed, at 6pm, that the parcel was STILL sitting out front waiting to be collected! By now, of course, it was too late to do anything, and being the end of the week there was no point in doing anything more than pulling it back inside and waiting until the start of business next week, at which point I rang the head franchisee for the region and once again booked the pick-up. At which point she must have clicked that I was the same one who rang the previous week, because I was treated to 10 minutes of utter bullsh*t!

It seems that the local drivers aren't paid for pickups, they're paid by the purchase of the ticket! Meaning if the ticket was bought in Auckland, only the Auckland guys get paid, not the Manawatu driver who collects the parcel. This, it seems, has something to do with the way their franchising system is configured. On top of that I was told that the driver HAD turned up to collect, but because no-one answered the door (which is a common side-effect of a business relocating premises) he climbed back into his van and drove off, ignoring the parcel sitting at his feet in plain sight!

Now, I can understand that the operation may be set up in a somewhat strange manner, different from every other courier firm around, but at the end of the day that is not my problem, and I was offended by the manner in which I was spoken down to by the operator, and the utterly slack service I received from them. To the effect that we are now boycotting Fastway in it's entirety! If anyone sends us FastWay tickets, we're going to send them right back. There's just no point in dealing with an operation that thinks it's acceptable to be rude and obnoxious to customers, big or small.

Overall, an utter waste of time dealing with this bunch, and I can only hope that enough people see this and decide to explore smarter, more customer-friendly courier firms.

Back in 2002, we launched with a thought: New Zealand needs a better banking alternative - a bank that provides real value for money, that has Kiwi values at heart, and that keeps Kiwi money where it belongs - right here, in New Zealand.

So we set up shop in PostShops throughout the country, putting us in more locations than any other bank in New Zealand literally overnight (without wasting millions on new premises!)