« The Hunger Games - The Ballad of Songbirds and Snakes review 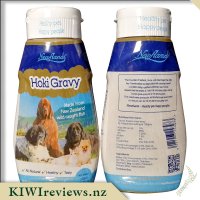 Disclosure StatementFULL DISCLOSURE: A number of units of this product have, at some time, been supplied to KIWIreviews by the company for the purposes of unbiased, independent reviews. No fee was accepted by KIWIreviews or the reviewers themselves - these are genuine, unpaid consumer reviews.
Available:
Online from various suppliers

Newflands Hoki Gravy is an all-natural, super tasty and palatable sauce to tempt even the fussiest of eaters. Generously mix in with your fur baby's food or medication to enhance the flavour and encourage them to eat. Comes in a 315 ml squirt bottle.

Newflands Hoki is sustainably fished off the coast of New Zealand; this gravy is certified by the MSC (Marine Stewardship Council). 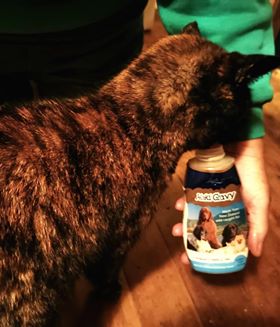 We have four cats, all with different personalities. The first two are cute, cuddly, everything a cat should be. And they are not normally fussy eaters, but neither was interested in trying Hoki Gravy - one sniffed it and walked away, and the other did not appear to notice it at all (well, he is not known for being super bright!) The other two cats, however, were very excited and from the moment the bottle first appeared they were constantly begging for more!

Pudding, the older of the two, thinks she is a person. She has no time for the other cats but she loves her humans and is curious about everything we do. (She quite likes dogs too.) When Pudding first spotted the bottle, she was interested - but then, when the lid came off, she was frantic to get to the contents. She did not wait for me to put some on a plate for her; she was standing on her hind legs, pawing at the neck of the bottle and trying her hardest to get her entire face into the opening! As I poured, she was glued to the bottle and lapping it up as it dribbled into her dish. It was gone in a flash and she was then demanding more. Now all I have to do to get her to come inside is to show her the unopened bottle - and she is instantly in the house!

Timmy, the younger cat, has had a problem all his life with dermatitis. He has a severe allergy to flea bites, and although we keep him dosed, he still picks up the odd one and suffers as a result. Since giving him a daily helping of the hoki gravy, we have seen an improvement; his fur is fluffier and there are fewer flakes. Like Pudding, he is crazy for the taste and although he has tried it poured over his dinner, he is just as happy to lick it from a spoon. We feed them separately because Pudding bullies the other cats so she has to be isolated at feed time.

We like the idea of giving the cats a natural supplement. We prefer natural foods ourselves, and what is good enough for us is good for the animals as well. The size is also ideal; the bottle lasted our two cats a fortnight, and since the instructions on the side say that the contents should be used within two weeks of opening, that worked out perfectly. I would like to see it available in a larger pack as that might be more economical - the price for one 315 ml bottle is quite hefty - but that would probably mean that artificial preservatives might be necessary to ensure it would keep longer.

I did appreciate the "odour-proof" lid; although the contents had a very ripe scent, I was able to store the bottle in the fridge without worrying about making the rest of the food in there smell fishy. No doubt it is entirely attractive to animals, but it would be a bit much for the average human. I am also pleased to see that it is a New Zealand product; at a time when people are being urged to buy local, this is a further sales point.

Vita Pet's special lathering formula works gently to bring dirt and grit to the surface of the coat where it can be raised away. Will not discolour pet's coat.

Made in New Zealand