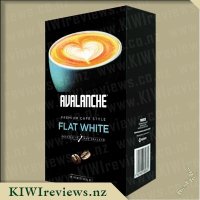 Disclosure StatementFULL DISCLOSURE: A number of units of this product have, at some time, been supplied to KIWIreviews by Avalanche Coffee or their agents for the purposes of unbiased, independent reviews. No fee was accepted by KIWIreviews or the reviewers themselves - these are genuine, unpaid consumer reviews.
Available:
at selected leading supermarkets

There is always a box of Avalanche Flat Whites in my pantry! This is my go to drink and when visitors come this is what is on offering. I find them so reasonably priced (40c a coffee) compared to going out for one.

The 'sticks' of coffee themselves are very versatile, I have on many occasions used them for teacher and coach gifts using a variety of the avalanche range. We are farmers and this often means taken morning or afternoon tea out to the paddock. These are super handy as you can chuck in a couple of sticks of coffee and wahlaa - flat whites in the middle of the paddock - no worries!

The trick is totally to make them exactly as it is described on the side of the box! Hot not boiling water and I always leave mine for a few minutes so it 'brews'. If done properly it has a lovely creamy texture and flavour and a lovely white fluff on top. They are easy to open and the coffee doesn't spill everywhere when opened which is always a bonus. It is always important to read that it states 150ml which is not a large coffee cup sized brew, too much water and it isn't nice and tastes like a very weak coffee.

The Avalanche Flat White is my perfect easy to use on the go coffee. There is always a box in the cupboard due to price, taste and ease of use.

As a big coffee drinker, the flat white is my go to coffee when buying from a cafe. A strict budget however, means that I have had to cut back and have been looking for a satisfying alternative. I have used the Avalanche espresso coffee for a number of years so I had high hopes for the sachet coffee and it did not disappoint me.

First of all, the sachet mixes up with a light foam on top so it feels like a "real" coffee. The coffee also dissolved well upon stirring, not leaving any of those little undissolved lumps that no one likes! It also has a nice coffee aroma and does have the smooth, creamy texture as advertised. I added a little milk to it also which I think added to the smoothness and I personally find gives it that little extra something, making it feel more like I'm drinking a cafe coffee. My mother also tried this one and really liked it, although the cappuccino flavour she really enjoyed this one and rated this as her second favourite.

This is absolutely one of the best sachet coffees I've had and have since purchsed it again and will continue to.

We were lucky to get this flat white coffee to review, we use Avalanche products already in our household as my daughter is gluten free. We been looking for a flat white for my partner to drink as he enjoys a good coffee more to the point he loves flat whites when we are out. Upon getting this box he was all over it, opening it up and making up the drink. The packets were easy to open up and its just a pour into the cup, the instructions to make it were easy. "Flat White : A rich, bold coffee flavour rounded off with a velvety smooth, creamy finish. The coffee connoisseur's choice" He says it had a coffee flavour but he wouldn't say a smooth flat white with a creamy finish. He was a little disappointed and said he wouldn't drink it for a flat white would only have it as a coffee, but even then he was less likely to drink it again. The price of it is good so will keep some in the cupboard for guests that enjoy a coffee nice and easy to make. He did say the smell was good, it smelt really good just not for him.

My husband needs at least 2 coffee's to function and loves his flat whites so he was really interested in trying Avalanche's Premium Flat Whites. The box is very stylish with nice clean writing and an inviting image of a coffee on the front. Each coffee sachet (there are 10 in total) look very attractive and have a small rip in the sachet so you can easily tear it open without the contents spilling everywhere.

It's really important that you read the instructions when making this coffee as the first cup my husband made tasted terrible. The reason being was that he used a full cup of water when the recommendations are 150 ml which is roughly half a cup. When it was made correctly it produced a much nicer result although you could taste the powdered milk. To counteract this I added a little milk which made it creamier and also helped to cool it down. We both agreed that this coffee was smooth and not too strong making it ideal for an afternoon coffee. Considering it already contains sugar and caramelised sugar, I found it wasn't too sweet.

To be honest, this will not replace our morning coffee but it is a great coffee to have on the go. It's easy and convenient to stick a sachet in your handbag or take when you're travelling. The price works out at 40 cents a coffee which you can't beat and is a much tastier option than other similar coffees on the market.

I don't usually drink flat whites, I've never had one that tasted any good so I've always skipped it and ordered a different hot drink so requesting this to try, for free, was an easy no brainer. The first time I made this was with a full cup of hot water, nothing else added and I did not like it one iota but I knew that that initial try wouldn't give me enough for a review, so I tried it a second time, this time with a teaspoon of sugar and found it to be marginally better but still not a drink that I would pick to have at any time.

I then actually looked at the suggested way of preparing this which says that we should only use 150mls of water, so a big difference to the 250mls amount of water that I had previously used. There was a marked improvement and tasted much better than my previous cups of flat white coffee. I then did another cup, again just the 150mls of water, but with half a teaspoon of sugar stirred in and found it to be almost perfect. I am left feeling a little underwhelmed by this coffee, however I would drink this variety at home and will suggest it to friends that I know like to have a flat white when out and about. I was sceptical about trying this variety because I have always found the name off-putting. What is a flat white? Something that does not have any character? Or is it just the opposite of a bouncy black or an exciting espresso? Be that as it may, I tried it and to my surprise found it quite pleasant. Not a drink I would choose by preference, but much nicer that I had expected.

My team of tasters (six of them this time) were more than willing to put it to the test. We had a shared morning tea at work so they made their own drinks instead of relying on the instant coffee usually on offer (and which most of us avoid!) We sat together so they could discuss their reactions. I did not tell them my own ideas so what they gave me would be original.

As expected, there was a range of comments. Two of them loved it, commenting on the creaminess and the smoothness. They also liked the taste, one of them describing it as "pure flavour without any extra stuff to confuse you!". Two liked the effect - not too sweet so they could really taste the coffee. Many varieties available today include extras like caramel and cocoa, so being old school coffee drinkers they liked the unpretentious nature of this brew.

The last two were less complimentary. One asked where the froth was as he considers this should be standard in a cafe-style brew. He also said he could taste the powdered milk which would put him off buying this particular variety. The other thought the result was watered down and was far too weak - although I did point out that she could use less water next time. She is going to try that; I gave her a second sachet to try out.

Looking at the range of comments, I felt that there could be more possibilities for this coffee. Personally, I too had found it a little insipid, so later that day I added three marshmallows, and a pinch of five spice powder, and tried again. (I could have added cinnamon on its own, but the five spice was handy so I went for that). I loved the way the marshmallow melted into the hot liquid so that when I took a mouthful the coffee travelled through the soft confectionery. It altered the flavour considerably, adding body and sweetness to it and completely transforming the effect.

I think I will choose this variety when I want to serve a fun drink to guests. And I will make sure there are plenty of marshmallows and some spice available as well, because as far as I am concerned this is now the only way to serve the coffee. Others may differ, of course, but personally I totally enjoyed it like this. Where would we be in a world without marshmallows?

Every day we are exposed to harmful environmental toxins such as UV light and pollution. Rejuvenate and protect yourself with with our specially formulated blends, full of essential phytonutrients.

Ti-Tonics are advanced blends of natural tea extracts, fibre and plant polyphenols, designed to quench your thirst and nourish your body. Polyphenols are nature's most powerful antioxidants and protectants.

This Ti-Tonic combines green tea, grapeseed extract and fibre with the natural flavour of pomegranate to provide a delicious, antioxidant-rich superdrink.