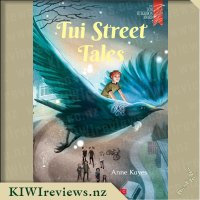 Disclosure StatementFULL DISCLOSURE: A number of units of this product have, at some time, been supplied to KIWIreviews by Scholastic (NZ) or their agents for the purposes of unbiased, independent reviews. No fee was accepted by KIWIreviews or the reviewers themselves - these are genuine, unpaid consumer reviews.
Available:
March 2017

There is something mysterious happening on Tui Street. One by one, the Tui Street friends are swept up in a series of adventures, each with a strangely familiar feel. Readers will enjoy picking up the subtle fairy-tale clues in each story. Though based in suburban New Zealand, Kaye's tales have a magical lyrical quality about them, marrying traditional European fairy tales with everyday NZ events, and occasionally Maori folklore.

My ten year old daughter and I have been reading together since before she was born :) I have been an avid reader my whole life and as a child enjoyed writing my own stories. I am over the moon that my daughter too has a great love of both books and writing stories. We love reading together and are always looking for books we can read together. We both love fairy tales and maori mythology and so we both were happy to receive this book for review.

The book is 7 short stories and initially when I first applied to review it I thought that the stories were going to be kiwi/maori themed versions of classic fairy tales. While not entirely what I expected eacheck story was a good read. Long enough to please miss 10 who loves her novels but short enough that we could read a story togethe before bed over a couple of nights. I especially love that the stories touch on important aspects in today's society that need talked about, such as bullying and different family dynamics etc. These kind of books please me as the give the opportunity afterwards to discuss these important topics without feeling like you're cornering your child or making them talk about important issues out of the blue.

The stories are easy to read and well set out. At the front of the book is a map of the street with house numbers of the characters in the book. This I thought was quite cool giving an understanding of where everyone lives. The cover is also eye catching without being to busy or over bearing. The title each time I read it I think of tui billboards though lol which of course is totally unrelated haha but makes it easy to remember. All in all its a good book and one that will stay on her bookshelf for a log time to come.

I love reading alternate versions of fairy tales, add to that a New Zealand twist and I was ready and eager to dive into this book.

The Tui is one of my favourite birds, one I get to hear nearly every day, so I loved the front cover of this book. Opening it up there is a map of the street, each person is named and their house numbered, so we can see just where each person lives in this street. I did find that either the font was not right or perhaps it could have been made bolder, but I did have trouble reading all of the numbers, so that could have been improved upon. There are seven short tales within this book.


The first story I thought was rather cute but felt a bit rushed in the end, this one met my expectations a bit more than the rest when it came to being linked to a fairytale. The second story I really like and it followed on from the previous well enough, connecting the two and ensuring that there wasn't a sudden jump in magic, abilities etc. This one felt like it had a good portrayal of a step mum/stepdad joining the family. The third tale my eldest found easy to relate to as, just like the young lad, he too had a teacher telling him he had to cut his hair several times. This one was a tad more out there but still enjoyed and I like that it didn't have a perfect ending relationship wise.

Story number four related itself to sleeping beauty, though on first read that didn't ring true for me. This tale weaves some Maori mythology through it and it gave me some lovely visuals, this tale I would actually love to see as a picture book, I would seriously buy that. Number five features the overprotective parent and I wouldn't mind a Tui friend like the boy does in this story. Six was fun but felt the most absurd and I didn't enjoy it as much as the rest of the book. The final story dealt with bulling and disabilities, I think it was the most realistic of the seven tales and I liked how it dealt with the topics, especially as one disability was the cause of poor choices and not birth.


The main characters all end up with a nice, but not perfect, ending, which suits the book well. There was a good gender balance of the main and secondary characters which makes this mum very happy, and all were just as capable as the others. My one gripe was that within each story, there were times when I got a tad lost and then realised that this was due to no obvious break between chapters. Each story is a perfect length for story time before bed, even if split over two nights. It didn't meet my expectations nor hopes, as in I expected a bit more of a parallel to the fairy tales they were linked to, however I still enjoyed this book and it's been enjoyed by my kids as well.


A fun read, one that's staying in my collection.