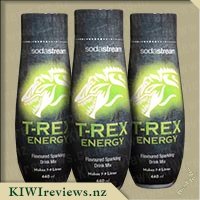 Disclosure StatementFULL DISCLOSURE: A number of units of this product have, at some time, been supplied to KIWIreviews by SodaStream (NZ) or their agents for the purposes of unbiased, independent reviews. No fee was accepted by KIWIreviews or the reviewers themselves - these are genuine, unpaid consumer reviews.
Available:
at selected quality retailers

Being someone who doesn't drink coffee every now and then I turn to an energy drink for a bit of an energy buzz, especially on those days that feel like they are dragging and the eye lids simply just want to close! While I do enjoy most energy drinks on the market, I do think their flavours are quite strong and sometimes not quite what I'm looking for. Discovering that SodaStream has the T-Rex energy syrups I was excited to try them as I would then be able to change the strength of the flavour to suit me. I was pleased to find both this full sugar version and the sugar free version in my latest review box.

Comparing this full sugar syrup to the sugar free one there was definitely a weight difference between the bottles. This one was certainly heavier, and the syrup was much thicker. I assume that using sugar rather than a sweetener makes the difference here. The syrup itself did smell very similar, so I was assuming the flavour would be similar too.

When I purchased my SodaStream machine I bought two of the single serve bottles. I prefer to use these as often I am the only one I am making a drink for, and it means I can make a single serve and have just that and not end up drinking a whole big bottle. I fizzed up the water and began pouring the syrup in. With using the small bottle I find it easier just to tip the syrup straight in as the measuring lines on the lid don't really work for the small bottles. I put in enough syrup that make the drink level go to the second line on the bottle. I mixed the syrup in and tried a mouthful. The flavour was reasonably pleasant, although I'm not 100% sure how to describe it. It has a fruity tang to it, but there is another background flavour that I can't quite pick. Comparing it to the sugar free I didn't like this sugar version quite as much, although I did still enjoy it more than other energy drinks that I have tried.

All in all I would buy this again. The flavour was pleasant and I do like that the SodaStream syrups don't have as many nasties in them as pre-prepared drinks. I certainly did get an energy buzz from it. I don't tend to feel a huge buzz all of a sudden, but I do find that energy drinks make me continue through the day longer than if I hadn't had one. By the end of the day I was still feeling an increase in energy so it had certainly done the job.

Like the rest of my family, I am a caffeine addict, so this was reason enough for me to try this stuff. Surprisingly, though, I found that this syrup was almost identical in flavour to the X-Stream energy cordial that this brand released a couple years ago, but it was still very effective at what it was supposed to do.

Interestingly enough, I have come to identify an energy drink by it's side effects. For instance, after guzzling down an entire litre of this stuff, I began to experience an all-too-familiar caffeine crash, but in my eyes this just proves that this drink has enough kick in it for it to be a true "energy drink". I felt quite refreshed after having this stuff, and was able to put that energy to good use before I became so worn down by the aftermath that I needed to sit/lie down for a while!

Taste-wise, I think that it was something different, and it had a really strange and unidentifiable background taste that I honestly can't say made the overall flavour any better or any worse. The taste of the drink was still quite pleasing, although not one of my favourites, and did well both when fizzed up, and just mixed with regular water. This was a good thing because our Sodastream machine is currently out of CO2 until I can get a refill.

To summarize, I would say that for an energy drink, this one does do it's job, and has an interesting but not unpleasant flavour that is apparently similar to Redbull, so I'm told? Anyway, I give this concentrate a 10/10 on everything except the flavour which gets a 9/10 simply because it wasn't the best, but not the worst by far, that place is still taken by the Tonic flavouring! Enjoy.

My husband is a huge energy drinker and I enjoy the odd one myself. Some days you need a little pick me up and extra energy but I never enjoy coming back down off the buzz afterwards. I find most energy drinks are so packed with sugar that you can't help but hit the sugar low after a couple of hours. When I saw the T-rex I was keen to try it while it still has a lot of sugar it has less than most drinks.

First impressions when I opened the bottle was it smelt just like original energy drinks before they started coming out with lots of fancy flavours for them. Fizzing up the water I found it next to impossible to see the lines in the cap but I went on where the lines are roughly on other bottles. First taste I was impressed it reminded me of a slightly weaker form of one of my favourite energy drinks. I decided to try adding just a touch more syrup and it was prefect! Was very pleasant to drink and I found I didn't have a big sugar crash after drinking it. My husband gave it a try as well but decided it wasn't for him as he's not a fan of original flavoured energy drink he would rather drink the fancy flavours. For me though it is a real winner and I will be buying it again, will be great to have on hand when I decide I need an energy hit.

My husband is a big fan of energy drinks, much to my despair, though he has been drinking less recently, so I figured this would be a good drink to try and see what he, and I, thought of it. The bottle immediately got the attention of eldest, the most dino mad out of my three children and though he was a little disappointed that he couldn't have any of the drink to try, he was very keen to keep the bottle when we're done with it. My big gripe about this drink is that it is so damn hard to see where the two lines inside the lid are, I could only find them when I held the lid at the right angle for the light to show me.

After finally managing to make the drink, we gave it both a try and agreed that it didn't taste too bad, in fact it would be up there near the top in preference flavor wise. I tried it at both half strength and full strength, half is better for my husband sugar wise but flavor wise the full strength drink is far tastier. This drink gave me a slight buzz but didn't make me as drowsy afterwards like some brands have done in the past.

Price wise and taste wise this is a good drink to try and certainly far cheaper in the long run, something I will be getting again.

Im not a fan of engery drinks but thought I would give it a go as its made with water. Sadly the time I was going to try this I found out I was pregnant and it clearly states on the bottle not for children under 16 years or pregnant women so this was up to my partner to do the tasting of this product.

Opening it was easy, but the smell that came out I really disliked it smelt strong, sweet and sickly. But my partner was still keen to give this a go. The bottle was easy and the lines weren't so easy to find but he got there. Made up the water and poured to the 0.5 level and added it to the water. This made the drink smell good, I feel it smelt like a lolly water.

While drinking this he actually enjoyed it, said it tasted like a V he had two glasses so about 500mls and on the bottle it says he can have 1.67litres a day at the MAX limit, and 250mls is one serving. It makes a decent amount 7-9 litres which one litre makes up for buying 4 V's. He said he wouldn't add anymore syrup as it would become sweeter and the 0.5 is prefect. So we will carry on buying this instead of the V's as it is cheaper in the long run and can be made anywhere, just need the syrup, sodastream and water and we are all set.